The Other Europe. Interview with Jacques Rupnik15/07/21

Just before the fall of the Berlin Wall, Jacques Rupnik was involved in the making of The Other Europe, a six part series documentaries filmed in Central and Eastern Europe for the UK’s Channel Four. He also published a book entitled The Other Europe. The archives of these documentaries (collecting testimonies from communist officials as well as opponents of the regime, artists, intellectuals and ordinary citizens) will be preserved in Prague under the auspices of the Vaclav Havel Library and made available online. Here, Jacques Rupnik tells the story of this incredible adventure, from the making of the documentary to the fight to preserve its archives and ensure they remain accessible.

Can you tell us about the origins of "The Other Europe"?

The idea was not to film country by country, which would have been simpler but would have given the impression of an encyclopaedia (we would have talked about the seizure of power, and then life under Stalin, then the era of de-Stalinization), which would have been very repetitive even emphasising the differences between the countries. We therefore chose to work thematically, were fortunate to have considerable means at our disposal for our project, which we took two years to complete. Our travels began in early 1987 and continued until late summer or early autumn 1988. We trekked all over these countries, but we then had to make certain choices in editing the film. For example, we went to Albania, but in the end, we did not include Albania in the film, nor indeed Yugoslavia. The main difficulty was that because we had chosen a thematic approach we would have had to systematically repeat, “however, things were different in Albania because the Hoxha system remained staunch totalitarianism”. The same goes for the Yugoslavian system which was specific and would have deserved its own documentary project. However, we did film in Albania unofficially, as tourists, and the archives are unique. They contain images of Tirana filmed in 1987, a ghost town, with no cars, nothing.

So that is the hard part. You can’t use all the material you’ve collected, so you have to focus on what matters. You have to define the space that you want to examine, define the field, the lines of questioning. And then come the questions about access. 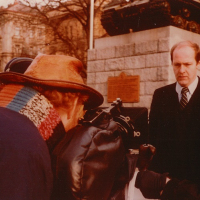