Jacques Rupnik: The subject of today's discussion was the way out of the present crisis. What is your view of the future? What is the way out? (Interpreter: same in Hungarian)

Dénes Csengey: We mustn't talk about the possibility but rather about the necessity, the crying necessity of finding a way out. And this can be three things: first, a developing economy, which would make it possible for us ten years from now to continue to consider ourselves a European nation, a European country. The second, a programme of national and cultural renewal, which would make it possible to live in this country once again with a sense of dignity, with our heads held high, to live here knowing that we are Hungarians. And that it is a good thing.

What are the differences between the urbanist and the populist, to which group you belong, in their thinking about the future? (Interpreter: same in Hungarian)

The difference is not so great as the question seems to imply. We both want a national democracy. We both agree that the fate of those minorities who live beyond our borders is our responsibility, and that we cannot ignore the fact that the very existence of these minorities is under threat in certain countries neighbouring our own. In all this we see eye to eye.   Our differences concern mainly strategies on the one hand, and the question of priorities on the other. Namely, what ought to be the first step, the second step the most urgent step. These are our only questions of contention. But this crisis which we are experiencing today in my view, will put an end to all our disagreements, because soon, in the very near future the solution to our problems cannot be put off any longer. Everything will become urgent, everything must take priority. We will have to find a solution, which will have to be an all embracing solution to all our problems. For this reason, all our divergent programmes must be combined to create a national reform movement. That's what I am waiting for and hoping for.

Here in Budapest, one feels as if there was a fair degree of tolerance towards independent culture or dissent. Is it so also in the provinces? You come from the provinces. How is the situation outside Budapest? (Interpreter: same in Hungarian)

Yes, indeed there is a certain amount of tolerance towards individual dissent. Towards group dissent, there is far less tolerance. And whenever the establishment itself is challenged by some independent spirit, such an attitude has never met with anything but refusal. I am telling you this to point out that even in Budapest tolerance is not indiscriminate. In the provinces, the challenge is far more limited. Ninety per cent of the country's intelligentsia live in Budapest. Ninety-nine, if not hundred per cent of the dissenters live in Budapest. In the provinces the implications of dissent are either more threatening, or the very idea of dissent is less likely to raise its head, or it takes on much milder form. As far as I am concerned, I don't feel persecuted, nobody is interfering with me. But it is a fact that in quite a number of our counties, I am considered an undesirable person, they cannot invite me, I cannot appear on a public platform.

How important is for you the question of the Hungarian minority in Transylvania? (Interpreter: same in Hungarian)

It is part and parcel of a nation's self-respect to care deeply about the fate of their fellow countrymen, even when separated from them by frontiers. Without this there can be no self-respect for a nation. Our situation is bad, theirs is life-threatening. There is a difference there that we must never lose sight of.

And what were your impressions? Did you feel that the Hungarian people there have the means of expressing their culture? And how did you feel, what kind of connection is there between the Hungarians in Transylvania and the Hungarians from Hungary? (Interpreter: same in Hungarian)

Their situation is constantly becoming worse.  Their schools are closed one after another. 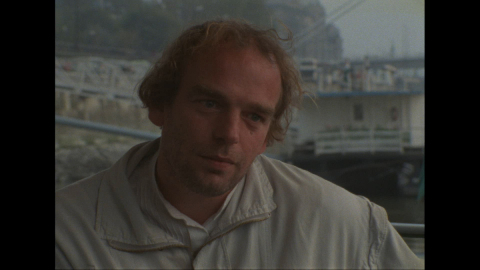 Dénes Csengey was born on January 24, 1953 in Szekszárd. He was a writer, a poet, and a politician, who died young at the age of 38 in Budapest on April 8, 1991. He is known as one of the emblematic figures of the regime change in Hungary.

He graduated from the Budapest Shipping Secondary School in 1972. He wanted to be a writer from a very young age, but he believed that this profession cannot be taught in classrooms, so he chose to learn it from real life. He worked as a car mechanic, dockworker, insurance agent, unskilled worker, substitute teacher, cultural manager in a factory. Persuaded by a friend, he eventually applied to university in 1977. He graduated from the University of Debrecen in 1983, where he studied Hungarian literature and history.

Dénes Csengey started publishing in 1978 and became a freelance writer in 1983. He was a member of the presidency of the József Attila Circle of Young Writers, which was re-established in 1982, later being appointed secretary of the organization. Due to his position, he took part in many conferences and literary policy debates, where he soon became widely known for his unwavering, determined opinion.

In the 1980s, he published three books: Gyertyafénykeringő (‘Candlelight Waltz’, short story, later radio drama, 1987), A kétségbeesés méltósága (‘The Dignity of Despair’, essay, 1988), Találkozások az angyallal (‘Encounters with the Angel’, novel, 1989). His best-known drama is A cella (‘The Cell’), which was put on stage with the help of film director Miklós Jancsó and writer Gyula Hernádi in 1983, in Kecskemét.

Many people know him as the co-author of Tamás Cseh, the lyrics of the album Mélyrepülés (‘Downward spiral’) were written by Dénes Csengey. His book Mezítlábas szabadság (‘Barefooted Liberty’), which included essays and speeches, was published in 1990.

In 1985, he took part in the meeting of the extremely mixed political opposition of the Kádár regime in Monor, and after the emblematic meeting in Lakitelek in the autumn of 1987, he was one of the founding members of the Hungarian Democratic Forum. He was an associate of the editorial staff of the journal, Hitel between 1988-91. On March 15, 1989, he gave a speech in front of the headquarters of the Hungarian Television advocating for the freedom of the press. One of his statements is quoted often: ‘To Europe, but each and all of us!’ From 1989 until his death, he was a member of the Hungarian Democratic Forum’s presidency, and in 1989 he represented his party at the meetings of the Opposition Roundtable. In 1990, he became a Member of Parliament, where he served in the Cultural Committee. In the late 1990s, he was the initiator and organizer of the National Foundation, which temporarily became a national movement promoting humanitarian and cultural goals.

He died of heart failure on April 8, 1991, in Budapest, at the age of 38, according to a medical report. His unsigned, early, and mysterious death soon became the subject of conjecture and conspiracy theories.

Since 1998, the Dénes Csengey Prize has been awarded annually to authors from the Carpathian Basin, who preserve and encourage the spirituality and social awareness of Dénes Csengey.