Why does the FDJ exist in the GDR?

The FDJ is a youth organisation within the GDR whose purpose it is to pass on the objectives of the party, the SED, to children. One therefore starts off by familiarising the children with these objectives and also with the work of the party. Of course, this doesn't relate to the extended environment, it is programmed entirely to the school environment, and objectives are being formulated, where they are being discussed in school, current affairs topics are being reported on and discussed and the aim is to find out what schoolchildren think or, influence certain opinions or just hear what kind of opinions exist within the class.

And what is the role of the secretary of the FDJ? Since you have occupied the post, what does it entail?

I have worked as a FDJ secretary myself. The situation in the GDR is that in each class there is a FDJ, well, all pupils or most pupils are in the FDJ and then each class has a FDJ leadership, i.e. three or four pupils within the class get a certain task and the FDJ secretary is something similar to a class spokesman, who represents the class, vis-a-vis the FDJ organisation of the school and also, well, vis-a-vis, the big, the very big bodies within the FDJ, well, there are questions, which the class is being asked or the FDJ secretary is given some objectives and it is practically my responsibility to pass those on to the pupils, to organize this, events for instance, or arrangements with the teachers. This is therefore what I have to do and pupils are coming to me as the secretary of the FDJ and talk to me about it. And then there are others, who… one who is the clerk or “agitator”, who analyses newspapers and perhaps puts together a magazine to be pinned to the wall with newspaper articles and where it is also being discussed and there are various tasks.

How much control does the party, the SED, exercise over both pupils and teachers?

Teachers are all being controlled by the SED, there are, for instance, party meetings in the schools for the employees, that is the same, as happens in the factories, it happens also in the day centres for children or in the creche, if one doesn't belong to the party, one doesn't have to participate in those meetings, but it is highly desirable that one participates because certain objectives in one's work are being discussed there. And political issues are also being discussed with the people and the one or the other may well get a task assigned and must give a talk or perhaps just discuss certain things, and work is always being discussed in any event, in school and in kindergarden with the teachers and there is an educational plan in kindergarden and in school there is a curriculum exists which teachers have to follow in their work, there are, it incorporates goals which are important to be tought to children, i.e. within one year or in whatever age group these children have had to achieve a certain standard of knowledge.

And how does it work - if you are a teacher, do you have to join the party or is that optional? And what about the FDGB?

Well, yes, it is somewhat optional, it…, we have always said it was an optional constraint, basically you are being forced into it because you are being asked again and again and also partially put under pressure, it is… well… it certainly looks good if you are a member of the party. Well, you should at any rate be a member of the FDGB. This is considered highly desirable because you are supposed to be a kind of example, you as a teacher should be an example to the children and at the same time to the parents, and it is therefore important to belong to the party of the FDGB.

And in your case…?

I was not a member of the FDGB, which stands for Free German Trade Union Federation, and I was asked several times why I don't want to join, I was asked to a “talk” where I was told that if I didn’t join the FDGB I would run into problems later on and that my… my first year after training in kindergarden would not be recognized if I didn't join the FDGB.

Now you are working here with the Society of Human Rights - what are the biggest problems for human rights in the GDR?

I am a member of the International Society for Human Rights and we look after persons and families who approach us with a view to…, well they want to emigrate and we help those families by writing to the relevant authorities here and firstly also register these people here by giving their details, because if our government is not informed, nobody knows that there is somebody who wants to emigrate, and we also see to it that they receive parcels, because many of them lose their jobs or otherwise, earn very little, and they have children and they do have problems to…, well, to get through the month financially and in such cases we support them, well, by sending parcels and, well, many problems are, well, that one doesn't know when one will be able to leave, so this uncertainty, one has applied for an exit visa and practically has to wait, one depends on the decision, well, of the state or the police and, well, one just has to expect house searches or that the police comes home or one has to attend several talks also, and has to state one’s point of view there, why one wants to leave, etc., one has to give reasons and it is also possible that one is put into prison, that one’s children are taken away into a home, those are all things which happen and occur.

Can you talk a bit about everyday life, what do people think about this control, is it an official fact that there is such a control and that one cannot talk freely, or…?

It is an official fact that there is a control, well people know, you are aware of it, you feel it in every area of your life, whether you work or go to school and people are really quite dissatisfied with their lives, they don't know how to change it, they are also afraid of saying anything. One cannot just go outside and talk to people openly, or so , that is very difficult and one normally just retracts into one’s own home and hardly goes out because one is so dissatisfied, one just doesn't want to go out any more, one is quite glad to be home after work and after having dealt with the main things and, because if one goes out one is confronted with it again and again, also one cannot go anywhere really, because pos… possibilities are so res… restricted, or also to go out late is poss… imposs… well it is almost impossible in the GDR and in order to not even be confronted with this stress, one rather stays at home… well… and… well…

Can you give some examples of militarization at school, from the very beginning, i.e. small children. How exactly does it work?

Well, militarisation already starts in kindergarden, that means that, well, for instance, if there are toys in kindergarden there will always be tanks and soldiers amongst them, there isn’t a lot of choice in toys but those things are always available, so it starts with the children, well, they learn songs about soldiers, draw pictures, that they perhaps visit the army barracks, soldiers are being invited to kindergarden and this continues in school, later on the “pioneers” are being taken to visit the barracks, the knowledge which one has acquired in kindergarden in consolidated, one learns new songs, that in the schoolbooks, well, for example, where the question is: one tank has a shooting range of 30 m, the other one 50m, how much is that together, so that children are always being confronted with it again and again. And later as well, when one starts one’s training and afterwards works in a factory, one is being confronted with these things, and one reads this motto in the street and the entire life really consists of these things … and one realizes after a while that many things don’t seem true any longer and one doesn’t even notice them in the streets, one just passes them and gets annoyed about them. Whoever is conscious or at least thinks consciously, ignores it and has lost interest anyway, however there are many people who are convinced and this is the danger… about it.

I applied for an exit visa on 1 August 1983 and lost my job in the kindergarden one month later and was unemployed for two months, and because I had been dismissed I was assigned a job in a factory and had to go and work there as a kind of expert in a VEB factory and had to work there for eight months and was then able to emigrate. Well… is that enough?

Sent the odd parcel and, these friends of mine also intended to leave the country and, because of keeping in touch with me, which is a criminal offence in the GDR, they ended up in prison, i.e. eight people were arrested, six … six have since emigrated and are also here in West Berlin and two still remain in prison.

Why exactly … can you give me some concrete examples why you don't want your son to be brought up under this educational system?

Well, in the GDR, there is a strong militarisation within the educational system, I have worked as a teacher in kindergarden and, for example, certain public holidays, and political, well … political problems concerning the state, etc. are already brought to small children, adapted to their intellectual capacity of course, therefore children are already being influenced. And, whether it is the army game for instance where the army is being glorified and it is stated that this isn’t a hostile army, it protects us, the army, the soldiers protect us, that's why we can play in kindergarden, or whether children's toys are being distributed and children are encouraged well, to play with tanks and soldiers. And these, in the GDR, are not military toys, they are “defensive toys” rather, that’s how they are called. And, well, public holidays, that they are being discussed at length and that children are being encouraged to draw flags or to go to a Mayday demonstration with their parents, or similar things.

When does militarisation start in school, how old are the children when they first experience it?

Militarisation already starts in kindergarden, i.e., well, the fact that the children are confronted with military toys, that such subjects are being discussed, that if there is an opportunity children are being shown army barracks or otherwise soldiers are being invited to kindergarden so that they can talk about their work and soldiers are well, this entire type of life is being shown as being completely normal. As if it was … well, as if it always had to be like that and the fact that such an army, for instance, exists, etc. Although there is continuous talk about disarmament and it starts with children who are 2 years old. And this continues, well, until school. Until the children leave the school or start work in a factory. 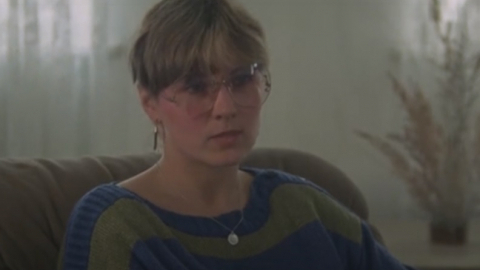