December 13, 1981. Where were you employed then and what were you working on?

In the last years before the martial law I was employed in a popular, large-scale journal called “Kobieta i życie.” I was a head of the social department in our journal. I was in the authorities of the Journalists Association at the time of Solidarity and so immediately after the introduction of martial law I have resigned from the communist party membership. Therefore I was not “positively verified” by the first committee and I was denied the right to work in that journal.

If you could explain what that committee was, for some people do not know about it?

After the introduction of martial law all the journalists had to undergo the process of so called “verification”. The committees qualified journalists for further employment – who were suitable to work as a journalist and who were not. So all the journalists faced a kind of political exam. I was asked by the committee why I had given up my party membership and what I would like to do in the future. I said that I did not want to deal with social and political questions anymore. That I would prefer to write about less important issues. When the newspapers had started being published again it turned out that I was not “positively verified” and I could no longer work at the journal. My colleagues from the same journal tried to persuade me to appeal that decision, they argued not to accept it. I had to confront another committee, the appeal committee, on a much higher level. There were there the representatives of the Communist Party Central Committee, the censorship office, Security Service authorities, the government spokesman office etc. That committee asked again why I had given up the party membership and also why I had organised the protest against dissolving of Journalists Association that occurred between the first and the second committee session. I was told that I no longer could work for our publisher, RSW Prasa, the biggest press publishing house in Poland. Yet meanwhile I received a proposal to work for a weekly “Przeglad Techniczny” published by another publishing house Wydawnictwo Techniczne so I started working there. Although “Przeglad Techniczny” is published on a smaller scale yet it has been perhaps more prestigious because it is directed to the managers, engineers and is not limited to that group only. By the way it is the oldest published weekly in Poland.

Maybe we can come back to that second committee…

Two months later there were the second, appeal committee. That second committee, on much higher level, consisted of the representatives from the Communist Party Central Committee, the censorship office, Security Service authorities, publishers. It turned out that the second committee decided to increase my punishment so I was not allowed to work not only in my previous journal but also in the entire RSW Prasa publishing domain, which was considered a communist party publisher. Yet I had received already a proposal to work for the other weekly published by another publisher Wydawnictwo Techniczne, so I transferred there and it turned out that there was no problem with that. Poland is Poland – nothing looks quite serious, the prohibition to work in one publishing house did not mean a total ban on journalism. I have to say that “Przeglad” might be published on a smaller scale but it is rather more prestigious and although I was supposed to forget about serious social, political or economic subjects, I am still a publicist, a journalist and I am writing on that kind of matters. I do not want to be a head of department anymore. I never enjoyed it and I prefer to be responsible only for myself.

Why were sanctions against you increased by the second committee? Why were you not allowed to return to your publishing house? Can you explain that?

The first verifying committee decided that I could not go back to my journal. The second committee broadened that sanction because in the meantime we were organising a protest against the dissolving of Journalists Association. I was organising the protest because I used to be in the Association authorities during Solidarity period. So they saw it as another example of disloyalty towards the communist authorities. Also I told them I did not want to continue writing on the social and political issues because I felt disillusioned by the turn of events. That was why they decided to punish me more severely. What was remarkable at that time the authorities desperately wanted journalists to work. Despite the formal bans, if someone really wanted to work in the press, they were ready to accept them. There was a shortage of journalists.

I left the communist party after the introduction of martial law because during Solidarity period, during a very tense, nervous times I used to say that if this time authorities would fail again and the party would try to solve the conflict by force one more time then I would not be a party member. It was at the time of the 25 years of my party membership because I joined the party during my studies, as a very young student, on the wave of enthusiasm of October 1956. It seemed then that we would have “a socialism with human face.” So I added my card. The committee asked me during that examination why had I resign from party membership. They were asking very politely and were sorry to ask me such a private and intimate question. I told them that there were too many turns on the road. During 25 years the party was not able to create the kind of socialism that seemed possible when I had joined the party, 25 years ago. So I simply decided that enough was enough.

Again, about that second committee: who mainly led the conversation, who asked the questions, how did it look like?

During the second, appeal committee session the person who mainly asked me was the representative of Security authorities.  The chairman of the committee was a head of press department of the Party Central Committee but it was the representative of Security authorities that led the conversation. He had a copy of our protest in front of him, the protest against dissolving Journalists Association. He asked me how I saw my further journalist work while protesting against such decisions like martial law or dissolving of Journalists Association. In his opinion, I could not work in the press. I told him that I could work in the press but I did not have to deal with such important political issues, I could concentrate on less important. I thought I might give advices to readers on everyday matters or write about handcraft. But it turned out that I am again dealing with my speciality: social and economic issues.

But you have quoted to that committee General Jaruzelski’s reaction to that protest?

I would rather not discuss that. 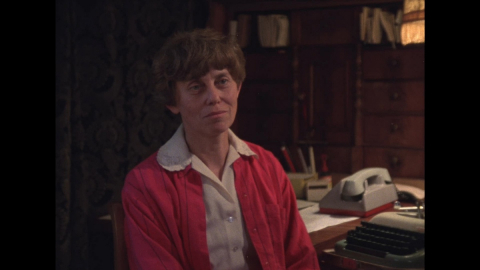 Agnieszka Wróblewska (born 16 December 1933) - journalist, studied at Warsaw University. In 1956-1981 a member of Polish communist party PZPR, she joined after October 1956 as a student and resigned in protest against the introduction of martial law in Poland. She was in the Polish Journalist Association authorities at the time of legal Solidarity (1980-1981). Before the martial law she was running social department of “Kobieta I Życie” popular weekly magazine. In 1982 during the process of journalist purges she was expelled from her job and denied the right to work in the biggest Polish state own press holding RSW Prasa. Later she worked for the oldest Polish magazine Przegląd Techniczny. With her husband, she travelled to the USA in 1988 and in 1989 she was Solidarity trustee in the district electoral commission located in Polish Embassy in Washington that counted Polish votes casted in the US in the historic Polish 1989 election. In free Poland, she worked at Gazeta Wyborcza. She wrote four books together with her husband Andrzej Wróblewski, a well-known Polish journalist.