Why were the Economic Police set up?

Well, as I think you may have experienced yourself in Hungary, our economic system has gone through considerable change during recent years. Previously, there were only state companies, cooperative companies and on a small scale: private trade and private small enterprise, in recent years on the other hand a considerable amount of, number of  small enterprises, private trade units and retailers came, its number, it appeared on a very wide scale in various trades and /into/ this large number of entrepreneurs came some people who started various speculations practically to make larger profits. A further factor has been that we have a shortage economy here, and the demand not met, and it was assigned the task of investigating activities, of corruption, profiteering, sharking, as well as activities harmful to the consumers’ interests within the field of manufacture, consumption and utilization.

How many successful prosecutions are there in Budapest as a result of your work?

And how many economic crimes you investigate, how does it compare to the West, are there more such crimes in Budapest than would be in a Western city of the same size or less?

I cannot give you a factual answer to that because I do not know the number of crimes committed in West European countries or capitals, but we do know that here significant economic crimes occur. Well, we can only investigate a part of these, most of them are not know, nor can we determine them statistically, there’s great latency in this.

How do you get your information?

We obtain information usually through reports, complaints and using our own police experience and we process these.

What are the most common kinds of crimes that you investigate?

Well, as I have already indicated, our duties are delineated concerning crimes, you see, we investigate activities of corruption, profiteering, sharking as well as activities harmful to consumers. So, for us these are the typical kinds of crimes because we don’t deal with the investigation of other crimes.

You see, as I have already talked about the shortage economy, shortages supply, shortage trade, practically he is forced in this way, if he wants to get hold of a sought-after product, that he will only get it if he pays a bribe for it, and this partner unfortunately is the employee of the state company. Otherwise, there is no one else investigating separately at the state companies: we investigate either by arriving at the private entrepreneur, private trader or private tradesman from the direction of the state company, or vice versa.

Have there been any prominent party members or members of their family that have been investigated or arrested by you?

Well, there were party members, practically there was a whole company management against which we started proceedings, this was the Elevator Manufacturing and Machine Servicing Company, its entire management. The fact was, that they had carried out corrupt practices, they bribed, profiteered, inflated prices, and so we carried out criminal proceedings against them.

I wouldn’t dare to say that. Actually, there are people among private traders and among private tradesmen too who keep to the rules. Here we usually have problems with people, who like to scheme, and who would wish to gain a large income without work, or actually who may want to obtain a profit which is not in proportion to their work.

Well, I couldn't say that, we are not here to frighten these people away from these trades but rather to help that these should operate in normal circumstances keeping to the rules, and practically we don’t really turn our weapons against, that is, initiate proceedings against professions or private people, or state people, but only against those who have committed a crime.

Interpreter asks whether it was a mistake to introduce it.

I don’t consider it as a mistake, it was inevitable. The introduction of the private sector improves supply and it fills in gaps which the state company on a large scale practically could not manage.

How big is the black market in Hungary?

Well, it varies. Practically, we don’t completely know its size. It exists… this is what we’re trying to survey, and accordingly we are trying, trying to determine our tasks.

Why is there a black market in Hungary?

It mainly arises from the shortage economy. 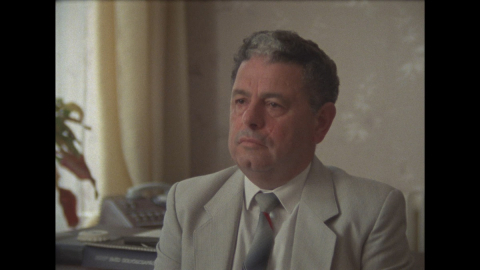 At the beginning of May 1988, Lieutenant Colonel Ferenc Tóth, the head of the BRFK's (Budapest Metropolitan Police) subdivision and head of the Budapest Economic Police, was deprived of his rank by the Minister of Interior and excluded from the Ministry’s staff.

Ferenc Tóth, a police lieutenant colonel, had maintained a conflicting relationship with suspects. The Minister of Interior ordered a disciplinary investigation against the police officer, which found that he had not abused his authority, but had accepted gifts and services of high value, and had received housing renovation and construction work for which he had not paid.

In 1989, however, the newspapers reported that Ferenc Tóth, the dismissed head of the Budapest Economic Police, had been sentenced to three and a half years in prison for bribery.