The Red Army arrived in Hungary with relatively great force in 1944. It was composed mainly of Ukrainians, Ukrainians under Malinkovsky and many of them had very little schooling, I would say average is maybe four elementary schools, and some not even that, absolute, they have to be self- supporting so there was a re… giving them free time to loot and take and rape and whatever they wanted to do. On the other hand, this all looked like a very messy picture but then you later realized that there was a group behind them somewhere, which knew very well what they have to do, how they will do it, how they will take over the country, and how they will create communist organizations that finally ran down the country.

Why was the, what was the reason why the Social Democratic Party and the other parties put up such poor resistance to the communist takeover bid?

The parties put up a relatively weak show against the communists for reasons, for many reasons. No. one maybe is that their leaders were all coming from the underground movement, very worn out, not planning for the future, had no time to really plan for the future, and then the communists were very well equipped, were trained in Moscow, what is the most important point, what to take over, from the police down to all other institutions which they thought is important for their cause. The second, the parties were immediately infiltrated by communist, like the Social Democratic Party had a so-called Left Wing angle which were really former secret communists, but the communists advised them to stay within the party, they tried to take over the party from inside. The Smallholder Party, which became the first majority party in the first election was a party of many many fractions from quite let's say left of center, Peasant Movement, to very conservative elements, or what were really what in my judgement would be in any other country four or five different parties together in one.

And did the communists know what they wanted and the other parties not?

Could you give an example of the simple election fraud used by the communists to secure victory in 1947?

In 1947, the elections had two very important falsification factors. One was what they called the blue papers which the communists, the Minister of Interior printed in, to my judgement, to my inside knowledge, about half a million copies, of which they used to later information I got, about 400,000 were used. Each they had false paper with them, maybe a birth certificate to it, maybe some other type of papers which were also made by the party. 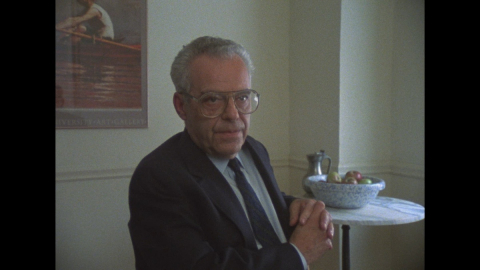 Róbert Gábor, social democrat politician, was born in 1919 and died on 16 October 2017 in Washington, D.C. He first encountered politics at the age of 20, in 1939, when he joined the Social Democratic Party and the Trade Union Movement. He wrote under a pseudonym for the newspaper  Népszava and after 1942 became a staff member of the anti-Nazi, illegal Hungarian Freedom Radio, supported by Prime Minister Miklós Kállay and Károly Peyer. On 19 March 1944, the radio was dissolved, after which he worked as a member of the resistance group called the Hungarian Freedom Movement, led by Béla Stollár, pasting posters and taking part in some armed fights.

After 1945, he worked with Peyer’s group of the Social Democratic Party, but Károly Peyer was displaced from the leadership by the left-wing Social Democrats, who in fact supported the Hungarian Communist Party. Peyer was eventually expelled from the Social Democratic Party and won a seat as a member of the Hungarian Radical Party in the 1947 ‘blue-ballot’ elections. He foresaw that a Communist takeover was inevitable and decided that he had to inform the Western allies. He entrusted Robert Gábor with the task of establishing contacts with the Western Social Democrat parties. He left the country in September 1947, later it turned out that he had escaped arrest. He was sentenced to death by the People’s Court in the show trial of Peyer and his associates. This was probably due to his unparalleled diligence in collecting personal data on the agents of the imminent communist takeover from the State Defence Department headed by Gábor Péter. The majority of the list of agents was published in Róbert Gábor’s 1998 book Az igazi szociáldemokrácia: Küzdelem a fasizmus és a kommunizmus ellen, 1944–1948 [The Real Social Democracy: Fight against Fascism and Communism, 1944–1948].

He lived in Paris for a while, then settled in the United States, working at the then-formed Free Europe Committee's research centre until 1959. During his emigration, he was a member of the leadership of the Free Hungarian Trade Unions and the Hungarian Social Democratic Party. He later became an employee of the AFL-CIO trade union federation. Since the 1980s, he has been the most influential adviser to American trade unions on Eastern European affairs.

At the time of the turnaround in Eastern Europe, the American Alliance, through Róbert Gábor, actively supported the democratic forces in Hungary, and helped the independent Hungarian trade unions and the formation of the League.

He retired in May 1996. He was elected Honorary President of the party at the 2003 Social Democratic Party Congress.