Firstly, we had a period at the end of the war which was determined by the efforts of the Soviet Unions to have an opening towards the West in view of the possibility of a united Germany at the time. Then there was a clear demand by the churches. A few years later from 1952, when it became clear that there would be two German states, the communist party here in our country had foreseen that the SED would set up socialism then as a trial period for the world view of communism. Then, even in perspective, there was really no room for the church.

Why has the SED developed a less hostile, apparently less hostile policy to the church in recent years?
(German translation) Why do you think the SED has recently taken a less hostile attitude towards the Church?

I am convinced that the SED had to understand that there was no alternative to the necessity of living with one another. The hope that religion would die out and that the church would lose its support and become superfluous was not realised. The church remained, the church has continued and it is a reality and the communists had to face up to the reality of Christians and churches in this country and therefore managed to adopt a pragmatic policy.

Firstly, it is thankful that the church is of interest for the people here in this country, and that, also, to our surprise, many young people come to us because many people also come who do not come from Christian families, that are atheist young people and we as a church are faced with the task of not worrying only about those, who have always belonged to us, that we want to be a missionary Church which is open to all, even to communists if they want. Everyone is very welcome and our problem now is this: they come to us with their ideas, which are not all Christian ideas, and they speak them in church. But the church must make sure that in its domain, what is spoken must be concerned with the gospel, what Jesus Christ wants to say to the people here in, right here, and so we are indeed in a certain tension: that we are open, that everyone can come, indeed leave no one out, not to pronounce any professional exclusion, when people can no longer show themselves, they come to us, but we must take care that it does remain a church, that means, that these things that are important in the New Testament are pronounced. And that we learn with each other. There are still problems because even between the leaders who are keeping an ever-closer watch that the Bible is cited and the young priests and young parishioners, they say…

Yes, there are in fact differences in opinion as to how we, as the church in the state should behave. There are, however, fewer differences over the current questions. Both the church leaders, the communities and also the youth groups are of the opinion that, for example, questions of military service are important. The questions of justice in the country are important. And also the question of travel, for example. The difference lies not in the questions but in the methods. Young people are impatient and say that everything must be loudly proclaimed and the state must be put under pressure, and we, the leaders, say that really we must speak as a church so that the state also understands what we want. We must also help it a bit to change. We see that a favourable development has been going on during the last ten years since the CSCE process, the Helsinki-Accord. We also notice that it must be cautions, like, for example, a development in other socialist countries, or here in 1953, 17th June, hasty processes mean steps backwards. And we want it to continually progress and must discuss with young people and must ask for a bit of patience, and for and to hide their impatience when it will not help. All in all, I hope that the favourable development will continue.

Does your more independent position in the DDR depends to a large extend on your connections with the church in West Germany?

Well, our position as the church here in this country which, compared to other socialist countries, is relatively independent, depends, I believe, on the one hand, on the particular historical developments after the war and with the relative size that our church had, i.e. its strength in the Population and then with her ecumenical work, , which she also had in the tradition with other churches, for example with the churches in Great Britain and there have been phases in our political relationship where the visit of the Archbishop of Canterbury is actually much more important for us was as the contacts as the contacts to the West German churches. They are also important to us, they are currently playing a very good role again, but I would like to emphasize that it is with West Germany, it is with Great Britain, with Sweden - also there traditionally good connections - and this, this being part of the ecumenical movement, it has indeed been of great help to us.

What social problems does the church deal with which the state is failing to deal with?

Traditionally we have as Protestant churches here, but that also applies to the Catholic Church, strong social work. We are leaders in some areas of health and social services for the whole of society, for example for the care of disabled people, especially for the care of people with multiple disabilities, i.e. blind and deaf, that is a task where they only help the church to some extent can, but also for the mentally handicapped, for cripples, then we have large institutions and it is actually an open secret that society could not cope with these tasks without the support of the churches. 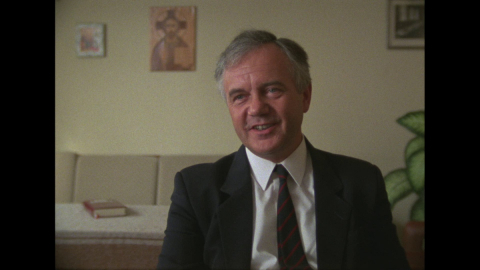 Manfred Stolpe was born in Stettin on May 16, 1936; he died in Potsdam on December 29, 2019. Stolpe was a German church lawyer and politician (SPD). He was the Minister President of the state of Brandenburg from 1990 to 2002 and the Federal Minister of Transport, Construction and Housing from 2002 to 2005.

The family moved from Stettin to Greifswald after the end of World War II and remained there after the founding of the German Democratic Republic. After graduating from high school, Stolpe studied law in Jena, graduating in 1959. Immediately thereafter, he completed his legal internship at the Evangelical Church of Berlin-Brandenburg, which set the course for his subsequent professional career in the church, which was to last until 1990. As head of the office of the Conference of Protestant Church Leadership, he was instrumental in founding the Federation of Protestant Churches in the GDR in 1969. As a Protestant church official, Stolpe strove to maintain a good but critical relationship with the SED leadership around Erich Honecker. While largely identifying with the social and economic system of the GDR, he advocated the concept of a "church in socialism," which was to advocate a social and economic order oriented toward people.

Toward the end of the 1980s, Stolpe also played a decisive role in ensuring that the Protestant Church increasingly became a refuge for the GDR's persecuted civil rights and peace movements.

After joining the SPD in June 1990, Stolpe became Brandenburg's first democratically elected prime minister on November 1, 1990, as a result of the party's election victory in the fall. The subsequent legislature was overshadowed by lengthy investigations and public speculation about the former GDR church official's possible involvement with the Stasi, but these did nothing to diminish his popularity as an advocate of East German interests in the state of Brandenburg, which remains unbroken to this day.

In 1996, the SPD elevated the Brandenburg premier to the chairmanship of the SPD Forum East Germany. Despite rising unemployment and the highest average per capita debt in the new federal states, Stolpe was able to hold his own as Minister President of Brandenburg until the fall of 2002. In this position and in leading SPD offices, Stolpe made a name for himself above all as an incorruptible advocate for the new federal states.

Following the 2002 federal election, he was appointed Federal Minister of Transport, Building and Housing in the federal government led by Chancellor Gerhard Schröder on October 22, 2002.