What do you mean by human rights in the GDR when you talk about human rights? What is that?

We have to start from certain areas of society where human rights are important for life. And on the one hand - I think actually the group of social human rights, that is above all with us the right to work and the right to education. And then, of course, the other political rights of freedom, which are particularly clearly violated or prevented in the GDR. And also the possibilities of political participation, which are also very undeveloped. With all these things, it would be wrong to always just cite the state or the security organs – it's like this – the history of the GDR has brought about a process that has made many people so dependent that in everyday life they no longer exercise their rights at very many points, their rights no longer even ... no longer perceive the lack of rights as a problem. This already starts in the upbringing of children – many responsibilities that actually only parents are allowed to bear – with their children or for their children – are already taken over by society or institutions. I.e. the education of very young children already happens according to plans – there are stages according to which a child … should grow up a child and everyone who raises their child at home in our country knows how good it is when you haven’t to raise your child according to these plans. Of course, that's not...that's not a compulsion, that's a habit, but a bad habit, I think, that many people themselves also support, because – it's not like the GDR is a country where you're only afraid. Much of what is missing in this country is also missing out of convenience, because people have not yet learned enough to take on the effort of independence. That is also a very important process. The whole process of education, which is important for maturity, still takes place in a way that leads people to obedience and conformity. In other words, school policy is set up to create a citizen who is easy to deal with. And that's where I think it's not just the struggle for a certain human right, but for a different kind of life that can only bring success – that we have to lead in all areas. It starts with the children and continues in ... or ends in many other areas of life.

Can you give a bit of examples of these attempts to put people in a way, yes?

Yes. In the human rights initiative to which I belong, for example, there are attempts to discuss something like the rights of children – a problem that many people don't even have – but not only to discuss it, but also to consider how one can actually do something oneself. For example, to look for possibilities of raising children together. That is not easy in our country, but I think it is possible. That we try not to do what is important for our own work in such a way that we exclude our children from it. Because if ... that we can do many of the things that are not easy for us together with our children. For example, these things that we do – “Kirchentag von unten” [alternative Church Assembly] – that many have tried to take their children with them. For example, something like this.

When you talk about social human rights, what do they have, for what reasons can you be banned from working and from education?

Yes. Of course, you don't get banned from a profession or education for having a different opinion or for having said something wrong at some point. The GDR is no longer like that. This problem occurs when one is consistently engaged. That is, when you try to make more out of your own opinion, out of the conflict you are experiencing than just talking about it at home or to a few friends. When you sit down, write a letter and sign this letter together with others, when you give it to the public. When you stand up for those affected. For example, if you collect money for those arrested, if you also turn to the press, if you set up your own citizens' initiative. In all these things, the state begins by warning the citizen. It tells them that it is in their interest to live here in safety, and it wants to guarantee this safety, but that is not possible if the citizen behaves in this way politically. And if these warnings are not heeded, then at some point the labour conflict sets in or, for example, the children don't get a place at university or the qualification is no longer possible. Things like that.

Those whom we know directly, that is after all several hundred whom we know directly, whose cases we have also been able to collect and document, are always only a very small minority. This practice is also being developed further in the GDR, because in recent years the number of legal prosecutions for politically committed people has tended to decline. This has to do with the international situation – the GDR does not always want to call its foreign policy weight into question. The economic dependency also leads it to give in in some places – i.e. to withdraw the worst forms of repression and move to quieter, more inconspicuous ones – and that's that. And I think that will also play a big role for the following years – especially because many people who are under ... young people who are under educational or professional bans choose a way out that is not good for any of us – they leave the country.

Can you give us a very practical example of the methods that the state, with which the state tries to educate a man [man] in the state, so not to control, so not with the police, but the other methods, the easier methods?

Yes, these means and methods start very early. Every kindergarten – children are in kindergarten when they are 2 years old – but even a crèche has so-called education and upbringing plans and these not only contain practical things like when a child eats or how a child dresses – they also already contain for these young children which values and which views are desired. Already in kindergarten, soldiers are held up as role models, people talk about the army, war toys are used – there are many actions against this – but this goes on. In school, already in the first grade, one becomes a member of the pioneer organisation and there, of course, an adaptation, an acclimatisation to the political ideas and principles of the state takes place over the whole time. There are children who are not in the pioneer organisation – even now in the GDR – you just have to be consistent as a parent. But even someone who is not in the pioneer organisation will take in a lot of political elements through the curriculum. As a parent, you can resist this. Further. When children become adolescents, there's a new stage in the eighth grade, when you're 14 years old, a lot of them, most of them, become members of the Free German Youth, the youth organisation – over 90 per cent of all young people are in the FDJ. There is a tradition in the GDR, the so-called “Jugendweihe” (initiation ceremony for young people), and there, too, they spend a whole year preparing, old party cadres, anti-fascists – they try to present the image of the GDR in such a positive way and to present the role of the citizen, the duties and responsibilities for the young people. I think that in all this time it is important to try something different. 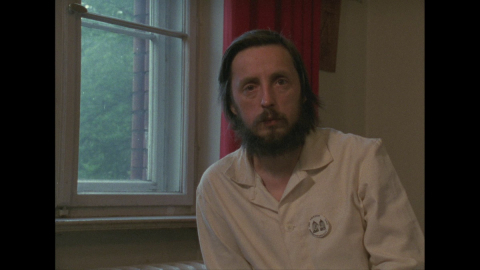 Wolfgang Templin was born in Jena on 25 November 1948. Templin is a German GDR civil rights activist and publicist.

Templin grew up in the GDR and, after graduating from high school in 1965, initially began an apprenticeship as a book printer, which he was unable to complete. From 1966 to 1968 he learned the profession of library technician.

From 1970 Templin studied philosophy at the Humboldt University in Berlin, which he completed in 1974. In 1970 he joined the SED and became an FDJ secretary. From January 1973 until his deliberate deconspiracy in October 1975, Templin worked for the Ministry of State Security as an unofficial special operative (IME) "Peter". When he was voluntarily unmasked in front of a student discussion group, he gave comprehensive information about the nature and scope of his unofficial activities. Following his studies, he began his dissertation as a research student at the Humboldt University in Berlin. There he participated in illegal Trotskyist student circles. From 1976 to 1977 he studied at Warsaw University and made his first contacts with the Polish opposition, such as the Committee for the Defence of Workers (KOR). From 1977 to 1983 he was a staff member at the Central Institute for Philosophy of the Academy of Sciences of the GDR and participated in the work of independent peace and human rights groups close to the church. As a result, he was denied a doctorate, which is why he resigned from the SED after his dismissal from the Central Institute in 1983. He lost his job, was banned from working as a philosopher and librarian, and in the meantime worked as a cleaner, forestry worker and stoker.

In 1985 he co-founded the human rights group Initiative Frieden und Menschenrechte (IFM), which carried out protests against human rights violations. He was co-editor of the samizdat magazine "Grenzfall". On several occasions he made his flat available for meetings of GDR critics and dissidents and maintained contact with various opposition groups. He was monitored by the state security and subjected to measures of subversion. For example, the MfS initiated the operational procedure "traitor" against Templin in order to put him under psychological pressure. On 25 January 1988, as a participant in protest actions during the Liebknecht-Luxemburg demonstration in Berlin, he was arrested together with his wife Lotte and other opposition activists such as Bärbel Bohley, Stephan Krawczyk and Freya Klier for "traitorous agent activities" and forced to leave the country for the Federal Republic of Germany, where he first began further studies in Bochum.

Following the Peaceful Revolution, he returned to the GDR and participated in the Round Table for the IFM and was its spokesperson. He ran for the Bundestag in 1990 on the North Rhine-Westphalian state list of the Green Party. In 1991 he was one of the founders of the party Bündnis 90. In 1996 he was dropped as a member of the Greens.

From 1994 to 1996 he was a press and public relations officer at the Haus am Checkpoint Charlie and then worked as a freelance publicist and in political adult education. He published several papers on the history of the GDR, the German unification process and current developments in Central and Eastern Europe and contributed to the international opposition handbook "Lexikon der Dissidenten" (Dictionary of Dissidents) by the Polish organisation Karta and the Robert Havemann Society. When he wrote for the right-wing "Junge Freiheit", the regional committee of the Berlin Greens asked him to leave the party.

Templin is a founding member of the Citizens' Office for Coming to Terms with the Consequences of the SED Dictatorship and a member of the Green Academy at the Heinrich Böll Foundation. He was also a board member of the supporting association of the Memorial Library in Honour of the Victims of Communism in Berlin. In 2001, on the occasion of the 40th anniversary of the building of the Berlin Wall, he protested against the cooperation between the SPD and the PDS in Berlin.

Wolfgang Templin was a research assistant at the Federal Commissioner for the Records of the State Security Service of the former GDR and was the office manager of the Heinrich Böll Foundation in Warsaw from July 2010 to December 2013.