For many people, the idea of reform is associated with the events of 1980, 1981. Is in your view, martial law… Was martial law, for you, the prerequisite for today's reform?

Indeed, our reforms started in 1980, 1981. At their source they had both the renewal and reforms movement in Solidarity and the reforms and renewal movement in the Party, which, at its 9th Assembly, worked out a new line of reforms, renewal, national consensus. What was unfortunate was that both these reformative currents failed to support each other. That, resulting from the prevalence of confrontational elements in Solidarity, the, well, threat of civil war emerged. In connection with this martial law became a necessity. But martial law was not targeted at the movement of renewal and reforms but its task was, well, to preserve the conditions for the policy of reforms and the policy of renewal. Evidence? In 1982, at the beginning, right after martial law: an economic reform and a number of acts which started to reform our political and economic system. Today we are heading towards radicalising, accelerating this process of reforming.

You often mention dialogue as a necessary condition for reform. What kind of dialogue do you have in mind? With whom and what concrete forms can it take?

The Party stands for the policy of national consensus of all the forces that we generally call patriotic, that is those that wish its nation, its homeland well, which do not follow the “the worse, the better” principle. Therefore, we are for a dialogue based on the rules of political, worldview pluralism, so a dialogue with the Catholic Church, with other denominations, with various social structures, their organisations, their clubs. I myself, for instance, have recently met with Catholic intelligentsia clubs from the entire country. Generally, the philosophy or motto is: „It doesn’t matter where you come from. It matters where you want to go.” Whether you want to go for the good of Poland.

The party has been retreating over the last 10 years from the spheres of economy or culture. How far do you think the party can retreat?

The Party is not retreating from its responsibility as a political force for the direction of the development of the country in all its domains. However, the Party is changing the ways in which it engages in these domains. It resigns from the methods of issuing decrees, administering, mandating. And it presents its values, so to speak, by the force of arguments rather than with the argument of force.

But what does the leading role of the party still mean then?

First of all through the working out, consulting all the political forces, social organisations and the nation, of country development programmes. It shows in putting the current direction and reform contents to a nationwide referendum. It is a form of political forces that lead the country talking with the nation, who are to speak up whether they consider this direction right, matching their interests or not. And as for the leading role, apart from programming, inspiring, it also shows in the particular way of steering personnel policies in the country. By the way, in any country the ruling parties, well, steer personnel policies, staff the top leadership positions in their country.

What's the significance of the Gorbachev factor of the reforms in the Soviet Union for changing Poland? What I have in mind is that isn't Gorbachev problem mainly changing his party, getting his party to accept reform, whereas the problem in Poland seems to be to deal with society, to have society accept the credibility of the Party’s good intention, good reformist intentions?

We claim that there is complete convergence of the processes of our renewal and the Soviet perestroika. It means that the goals of theses processes are similar or identical. However of course the methods, forms differ owing to the fact that each of these processes match the national circumstances, the conditions of the country in which they are taking place. These processes support each other. As regards our attitude to perestroika, we consider it to be legitimate, we endorse it and, well, believe that it is also conducive to implementing our renewal policy. We think, we hope that also our renewal-related experiences are beneficial to the Soviet party. As for certain differences, it is true that here the manifestation of the impulses to renew started not only from the top, and perhaps not mainly from the top, but from the bottom. From the base, from the masses, from the working class, both in the Party and beyond the Party. Whereas it seems that in the Soviet Union the leadership has been programming the perestroika programme basing it on the interest and on the feelings of its base.

You are the secretary in charge of ideology. What is the role of communist ideology in a country which is overwhelmingly Catholic?

As in any country. But it makes us specify the relations between Marxism, Christianism, between believers and nonbelievers. And our policy is that we acknowledge the contention in the ideological dimension, we believe it to be natural. We are against transferring this contention over to the political dimension. Here we stand for a kind of political co-existence and we believe that regardless of these ideological differences there is a very extensive platform for co-operation between a socialist state and the Catholic Church in terms of ethics, morality, educating the society, patriotism, attitude to state security, national security, and in many areas connected also with social life. I think it’s a new statement from the Party which plays a leading role in a socialist state that it has acknowledged a permanent place for the Church in the socialist system of the state. What is therefore the role of socialist ideology? Well, it is to foster the values of this ideology in the state. That is, the values of social justice. And in this respect we really do not believe that these values of ours and of the Catholics, of us Marxists and of the believers are contradictory. After all a number of values of Christianism and Marxism are fully concurrent, particularly in terms of morality and ethics.

But in the past the Communists have always believed that the Catholic ideology is reactionary, that it is an obstacle to the construction of socialism. Isn't your present emphasis on dialogue with the Church? Isn't it abandoning that premise? Isn't it acceptance of defeat?

Listen, the truth is that, as you are saying, on our part in the past period, but the truth is also that the Church on its part also considered socialism, social democracy to be something bad and it would ban it. And so both the systems have been changing. And we do not interpret these changes as defeat but as a common victory, both on our part, of some dogmatic constraints, and on the part of the Church. In any case, there are different currents in the Church too, there is also liberation theology.

I attended a Party meeting at the Gdańsk Shipyard. I heard a worker there saying that the referendum, that the question put at the referendum was a very ambiguous one because it was asking people to endorse democratization on one hand and at the same time to endorse economic hardship. And whether that was not simply a trick on the part of the authorities to shift responsibility for the situation on to society?

We are not shifting responsibility on anybody. And the referendum is a sign of the new approach to democracy. Direct democracy. And if we wish for qualitative changes in the economic system and in the political system, then we want to ask the nation whether they are for these transformations or not. And this is not shifting responsibility onto the nation. It’s the other way round actually – affirming agency of the nation, which is to decide on the direction of Poland’s development in decades to come. About Poland’s development direction. Is this shifting responsibility or is it rather granting the nation with full subjective rights for them to define their fate, their growth direction. We believe it is precisely the latter. That is the strengthening of democracy, of the subjectivity of the nation as the sovereign of its own state.

And what do you say to those who say the referendum is simply a means to have society endorse huge price increases so that when there is genuine economic hardship in the country, you can simply say: well, you voted for it. You've accepted it.

It is not true that regulating prices, that is creating a better economic, market balance has to tragically or heavily affect working people’s situation. Compensations have been envisaged for the working related to price increases, which should completely offset these losses countrywide that people will sustain, with two exceptions: expenditure on alcohol and tobacco. There will be no compensation concerning these two family budget lines. There will be compensation for the other ones. In benefits for children and so on, in social benefits and so on. So, it is not true that our reform has to negatively affect our citizens’ living standard. Its aim is different: to create better and faster conditions for gradual improvement in this standard, not for its deterioration. I don’t know why we all keep scaring one another so, right, with the reform being mainly a burden or shifting its weight on somebody. It’s not like that. 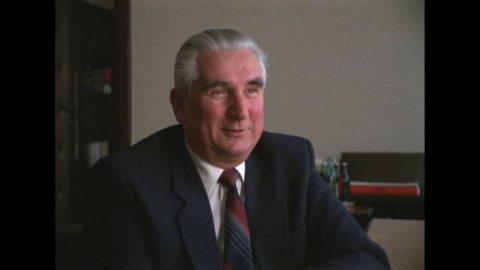