What was the political system back then? The attitude… Did people believe they were building a new nation?

Well, the political system. In 1953 already, it was more or less the same, similar to what’s now. Only for sure hopes were different because the country was building itself up and people believed it would surely get better. Better than it was before the war, cause before the war there was horrible poverty. It’s even hard to imaging. Surely, you can’t imagine what poverty there was. Where I come from families were very large. My father came frome a family of seven. Mother of six. Well, actually there were seven siblings at my father’s and six at my mother’s.

How has it changed now?

Well, for sure the living conditions are much better. Well, but expectations are surely different.

What are the expectations?

The expectations, the expectations are surely like everywhere, in any country. That people can have a better life, that they can buy more for what they earn. Same as everywhere. We certainly believe we earn too little in relation to our needs.

And did the workers have a sense of a kind of shock throughout the martial law period? What were the sentiments towards it versus Solidarity?

And the general attitude when you returned?

A bit… well, how to put it? People were surely a little surprised with these developments. What will it be like? What will happen? Everybody asked the question. We are rather prepared… well, used to different martial laws and war, because there are still people around who survived the war. Yes, I’ve also survived the war, so… Maybe these younger ones felt it more strongly.

And do people still trust the Party? That there is something that comes with the reforms? Or have they already lost their hopes? A simple, average Pole, what does he or she say?

An average Pole is somewhat sceptical about these reforms. Because for so many years little has been done. Well, if the reforms are put in place, as the government announces, then something could change for the better. Everybody knows we have huge debts and we need to pay them back, and our incomes, all this. What we have is just what is left. Even though we fail to repay these debts either. We also have interests on these debts. So some of our money, which is well known, goes for repaying it and we have to finance it all.

What was it like during the Solidarity period? What kind of atmosphere here in the shipyard?

Well, the hopes were big that something would change. But well, not much changed in that period, there were a lot of strikes. Unnecessary, to my mind, as… But well, it was some political strife, I think. I can’t talk on behalf of everybody. But to my mind, definitely all these…, well maybe not all the Solidarity activists, but they surely believed something would change. Clearly, then, as with any other upheaval, they surely hoped for that, some takeover, perhaps an intervention. And a change of authorities. I don’t know whether this would be all to the good or bad. It’s hard for me to say.

And how do the workers here perceive the Party now? Do they trust it or not?

This trust is not what it used be. In the past, it was certainly greater, because until the 70s was not been so easy but people believed that things would start looking up but… the mistakes that the government made, people in managerial positions, led to a crisis situation, which deteriorated even more with time once Gierek’s team took power. Those snap investments, unfinished…

And did you yourself leave the Party during the martial law period?

May I ask why?

I hoped something would change because the promises were it would change. There were Party meetings too, but as the time went by all slipped back to the old ways, like before. And our leaders refer to, well, the 9th Meeting, the 10th Meeting, but nothing actually follows and there are no major changes.

And what are your hopes for the future?

I would like it to change, but here, so far… if it stays like it’s been so far, it surely won’t change, because here is... Our administration is very extensive. Here, our shipyard, for example. There is a lot of administration here, and it is hard to bear such a hump. When we need to work, for example, one to one or even in the shipyard itself. And let’s take into account the consecutive administrative levels. Well, city, voivodship, central one. Mind you, this is a huge army and very many people sit all around who practically do nothing. At work, our officials stroll around the city, do shopping. 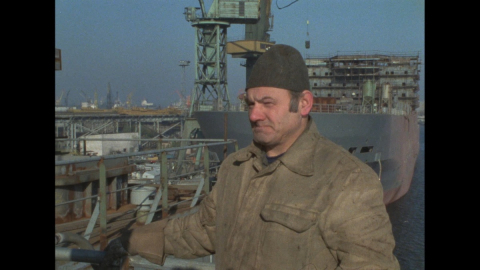