This is a party newspaper, so is its basic purpose to propagate and support party policy, or to inform people about what’s happening in the world, you know, objectively?

If you wish to propagate a policy you must first of all gain the interest of the readers, and readers are not interested first to be the subject of propaganda but to get information, I think this is a simple thing, and we try to make our newspaper in this sense.

Yes. When this newspaper was founded after ’56, or in ’56, we had a slogan, we had this is the news… this must be a newspaper of the people and the newspaper of the party. We must link these two functions and the party has, you know, the leading role in Hungary and the party is dealing with all the questions of, of policy and economy and culture and so on. But don’t think that you can read in every line and in every article, sentences of party resolutions, this is, this is not, this newspaper is not very different from, from your, your newspapers.

But in then, what I’m getting back at is in what way then is it a party newspaper? You must give the party’s viewpoint a privileged position.

The party opinion is defined in resolutions in very general terms. What is interesting for the readers and too for the party members are the details, and they are not…, there is no, there is no party opinion, and you have a lot of things which is with the subject of discussions and different opinions. And we don’t ask in every moment the party what do you say to this or that. We have our, our, the members of our newspapers, they have their opinion, they have too their personal opinion and their personal approach.

But what are, can I ask you what are the, what are the formal links, the organization links, between the editorial board here and the party centre itself?

One of the personal link is that the editor-in-chief and myself, we are members of the Central Committee, but we have in every two weeks, we have, used to have a little conference about the actual themes with the other newspapers together in the party, and there we are speaking about how dealing, about this or that, but we have I think you, you have the, the illusion of the picture where there is a very hard discipline in this party and, and from one centre is decided what we can read…, what we can write about this or that.

I asked, the reason I asked the question is when we were here last, we were told that we, we were going to film here but in fact we couldn’t film here because a senior party figure was coming here to look at your front page for that day, because it announced these major government personnel changes. Now that seemed to me to imply, to a westerner, would imply very close control from the party center over the newspaper’s actual front page.

Now I don’t have the statistic of these events but I think that leaders of the party are looking, are coming here, this takes place in a year two times or three times, but first of all at the end of the year because they used to greet us for the, for the new year, for happy new year. This is not what…, I don’t know what happened then, who was here.

But you wouldn’t think that, you don’t think that’s normal, that the party leaders would come here and say we..., this is what I think, you know how the front page should be today?

No, no, this is impossible.

But he might come here and say I’d like to look at what you are saying, because you’re the party newspaper. Before you print it?

What, are there any…?

He has a lot of things to do, not for looking at about our front, front page. And I am convinced that I, I know better what must come on the front pages as he knew that.

I am only asking you because I, one of your journalists said that he was coming there to see how you were doing your front page that day because of important government and party changes.

Yes. No I, I this, what, the news about this change this is in our newspaper, not a problem of policy but a problem of typography, how to arrange the pictures and nothing, nothing else is interesting in this, in this moment, because the fact that this man was elected as the new Prime Minister or the new…(coughing)

But who gets the biggest photograph is important?

Oh yes, these are traditions. I, I think it’s, it’s not very different from your traditions, that the leader, the most important, people with the greatest prestige have the greatest, greater photographs.

What, are there any, what are the taboo subjects for your newspaper, the things you actually couldn’t write about? 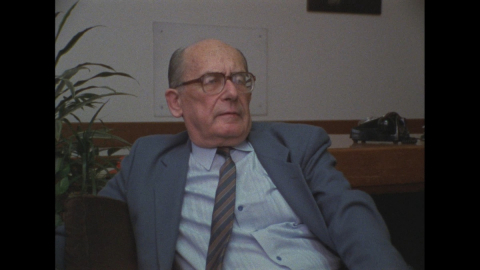 Péter Rényi, Hungarian journalist, critic and retired deputy editor-in-chief of Népszabadság [Liberty of the People], was born in Temesvár (today Timișoara) on 15 September 1920 and died in Budapest on 8 October 2002. His original profession was printer and graphic designer. His father, Ervin Rényi, was a chemical engineer and trader of chemical substances, and his mother, Ila Schönheim, was born in Temesvár. Péter Rényi married Ilona Ungár in 1948 and they had three children, two boys and a girl.

Rényi and his parents lived in Berlin and then in Hamburg, Rényi studied at the Lichtwarkschule in Hamburg, and he was a schoolmate of the future German chancellor Helmut Schmidt, with whom he maintained a personal relationship until the end of his life. In 1934, the family returned to Hungary, and Péter took his final exams at a German school in Budapest because he spoke better German than Hungarian. He was not allowed to go to university because of the numerus clausus, and between 1938 and 1942, he worked as a printer’s assistant for Imre Kner in Gyoma. Later he returned to Budapest, worked at the Hungária Printing House, where he met Péter Veres, Gyula Illyés and Miklós Radnóti, reknown representatives of Hungarian literature.

He was sent to labour service from 1942, but in the last months of the World War he escaped and had to go into hiding. He became a member of the illegal communist movement, took part in the national resistance, worked as a graphic artist and printer, and produced forged documents. After the war, he worked as a graphic designer for the Romanian Communist Party in Temesvár, and returned home in 1945 to join the Hungarian Communist Party. Between 1946 and 1948, he worked as a graphic designer at the Szikra Printing House, and until 1954, he was a member of the Hungarian Working People’s Party’s agitation and propaganda department. In 1949, he enrolled in the Party Leadership School of Hungarian Working People’s Party, which he completed in 1951. From 1954 to 1956, he was head of the cultural column and later the secretariat of the party’s daily newspaper Szabad Nép [Free People]. From 1956 until his retirement in 1988, he was deputy editor-in-chief of Népszabadság, but in reality he was the grey eminence of cultural life, and the perpetual deputy editor-in-chief, as he was called in editorial anecdotes. He was an eminent publicist, critic, had extensive international contacts, and had a great influence on cultural life.

In 1967, he received a candidate’s degree in literature. From 1963, he was President of the Film Arts Council. In 1971, he became a member of the Hungarian Socialist Workers’ Party’s Working Committee on Cultural Policy and Cultural Education. In March 1980, he was elected to the Party Central Committee, where he remained member until May 1988.

After his retirement, he worked as a proofreader for Láng Publishers in 1989, and then as an editor for PPS Budapest Ltd. between 1990 and 1993.