Who selected you to be first party secretary in the factory?

Well, I have been working at this firm for the last 26 years, and I have already been involved – alongside my work responsibilities, in social responsibilities, I was the secretary of the Communist Youth Organization, and the secretary of a party unit. I have high qualifications in political education; and they were satisfied by the way I worked at my job, everybody knows me here, in the company, and I would think, these were the reason why I won their votes, the votes of the Party Committee.

Does your appointment have to be approved by the City Party Organizations?

Well, the actual appointment, no. In fact, there were discussions about who might be eligible for election, eligible for the party committee secretary function. Well, my name was actually mentioned most of the time in the conversation, and hence, well, I think I was nominated for that, and of course the city party agreed with the collective.

Why isn’t every worker in the factory a party member?

N: Well, the party is the elite, the elite team, only the most excellent workers can be members. Of course, there are many things to consider when applying, but you need to stand out with certain things in economic work, and also to be committed to the party’s policy and be ready to act on, to actively work for the community, be a community person, be able to think in a collective spirit. These are the most important features, and only these people can become members of the party.

Why do you need the party in the factory, as well as trade unions?

The party, in reality, is the leading force in Hungary, it is the party of the rule of the proletariat, since the most advanced thinkers are the members of the working class, but are involved in the party. The party plays a huge role in creating unity, party members are present in all walks of life, and are helping to create unified thinking and ideology in our work; besides this the trade union is naturally given a very important role in reaching democratic decisions, because it has its wide support in each working person.

I would like to illustrate the role of the Party Committee by using an example. Let’s say the company has a very successful product, which could guarantee a very high profit. At the same time, the overall expectations of the country’s economy would desire production for the export market, or the country’s population has to be supplied with high quality goods. The party helps us to reach our decision not always to consider first of all how much profit we can secure for our company, but that there are the overriding interests of the country’s economy, or our export needs, or providing for the Hungarian population, this is also a matter of politics, therefore it obvious that the party plays an important part in deciding the correct answer to this question.

Do you think people in the factory who actively oppose, or criticize party policy should be disciplined?

We are glad when our policies are criticized, or probably our instructions, because we believe that honest criticism helps us to move forward. If, maybe this criticism is not well founded, then, naturally, it should not be allowed to be voiced. Critical remarks are always investigated, wherever might they have come from, could a certain measure really be incorrect, or some decision; and we always follow these up even if this criticism might not have come from party members.

In my opinion there is no change in the policy of the party in its important and fundamental aspects. The relevance of some of our measures probably has a question-mark over it, naturally the duty of the party in today’s situation summing up the present situation, circumstances and criteria is to set out a new route that would the fundamentally identical but in the sense, that in the present situation, properly defined, what should individual party members be doing, what policies should they be practising, and naturally, in my opinion, the party does not lose face by doing this, we are practising very open, and honest policies, at present people are aware of this, we feel, obviously, a lot of attention has to be paid to make our decisions acceptable by a large number of people, we must make use of information received even from the lowest scale, in other words, information coming from the wide masses, to be able to arrive at just decisions.

Don’t you think the factory here would be more efficient if the party withdrew completely from the factory, and let the management and trade unions run the factory?

I am sure that it would not operate with better results, because the ideology that we use for motivating our economy at present is the same as our party policy, because of which this factory also has its place and plays its part in the country’s economy. The party does not set out individual directions. The very important question of today’s economic situation is also being answered by this company its role within the country’s economy. Naturally, this is party policy, and it cannot act in any other way than the decision we made for it. 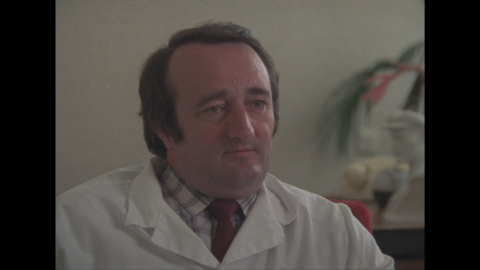 In the autumn of 1989, he was on the list of congress candidates for the Hungarian Socialist Workers' Party Congress held in October, compiled by the Szeged City Party Committee.

Sándor Nagy was Secretary of the Party Committee of the Szeged Salami and Meat Processing Plant and plant manager of the factory and in 1989, was awarded the Silver Medal for Service to the Fatherland by the Minister of the Interior on the occasion of the Fourth of April.