When was your union set up and how was it set up?

Historically, on 8 October 1982, the Sejm of the Polish People’s Republic, our Parliament, passed the trade union law and since then, trade union organizations could be established in workplaces, in enterprises. At the same time, this law disbanded all previous trade unions, industrial unions, independent ones, and the Solidarity union. Just a few days after the law was adopted, several people here in the workplace, seven to be exact, seven fellow workers from various departments decided to form such a trade union organization here. In accordance with the guidelines, the law, they reported to the director to inform him about this fact. Since then, the preparation of the appropriate documents necessary to register the new organization by the regional court in Warsaw began. Mainly, it was about the statute of the trade union and the policy papers. All of this was done by this group, on 7 December 1982 the union organization was registered, and according to the law, it began its statutory activities on 2 January 1983. Except, at the beginning, it was a group of only seven people. The group grew. In February, the first general assembly took place, the meeting of all union members. Then, there were around 213 or 215 colleagues, I don’t remember, I can only say what was in the documents. It was decided then and there, that only when the organization becomes more representative of our large enterprise, so when there is around a thousand people, a conference of union delegates will be held, statutory authorities will be selected and a program for the term will be developed, to be implemented by those authorities, which happened on 15 June 1983. From that day, normal statutory activity of the union organization began.

Why did you and your colleagues decide to form this union?

One preliminary statement. Actually, I did not form this union, because I joined the organization much later. Here is the answer as to why. Together with colleagues, as we worked, we noticed that there are a lot of issues around us, which simply hinder us. Other than we saw that they hinder us, complaining alone achieves nothing; you just have to do it. If something hinders us, those hindrances must be removed. That’s how it happened. We saw the union organization as an opportunity to resolve our own issues, but also the issues of many other people, who were hindered by them. That’s how it started. I did not expect to become the chairman of the union organization. But that’s how it turned out, so we still pursue these issues.
First of all, I really do not know what percent of the present union members used to belong to Solidarity, or to an industry union. We have never known or kept such statistics; however, I can say who among my colleagues, friends even, with whom I work today, who belonged to what union. I belonged to an industry union the whole time. Two colleagues, members of the presidium, did not belong to any union in 1981. There was one colleague, president of our Commission on Intervention at the enterprise level, who was practically the founder of Solidarity here, in the factory. He left Solidarity in September 1981. That is what I can say about my colleagues. What are the percentages, as I said, I do not know. We don’t keep this statistic. We’re simply not interested.

First of all, I personally think that in the modern world, there is no organization or organism that is completely independent of anything. Certainly, we are independent as an organization, as far as making decisions that concern issues, which we want to pursue. The union board exists, makes decisions. Of course, many external factors influence the quality of decisions. For example, we request a pay rise from the management. One that would satisfy us, the staff. Of course, if the company has no money, we must yield our demands, and that’s the dependence. We cannot say we want this or that, or this or that issue has to be resolved as we wish, and that the conditions for accomplishing the matter come second. That is the independence here. I mean, no one from outside forces us to make a specific decision. At least so far, we have not had such situations.

The electoral arrangements are as follows. Total number of union members selects delegates for a general factory conference. From among these delegates, who are now 136, 40 board members are elected. From among board members, the delegates select the chairman of the union board, who then proposes to elect presidium members from the board members. So practically, at least the selection of the chairman, is an indirect election through the union delegates. Now the other thing, strike. Well, firstly, there are such possibilities. Although it is a tedious method, and rightly so. But I must say that in some cases, if there was a necessity, I think that the board would decide to initiate such a procedure. It once happened, I must say. By virtue of the resolution of the union board, we raised a collective labor dispute with the management, but it ended at the negotiation stage. The issue was resolved, the agreement ending the dispute was signed, and the issue was later implemented well.

I think that there are some fundamental differences in functioning between the union organizations in Poland, or in socialist countries, and in the West. According to the legislation in force here, in Poland, a union organization is a sort of co-host of the workplace, so it really has a lot of ability to affect the decisions made about the functioning of the enterprise. Cooperation with the workers’ council as the body of the enterprise, with the management. So, at the discussion stage, before a decision is made, there is a chance to influence the quality of those decisions. This is why such radical disputes rarely happen; however, in many cases, disputes between individual union members and the management are very significant, even prolonged. But, generally, a discussion is more productive than a fist fight. 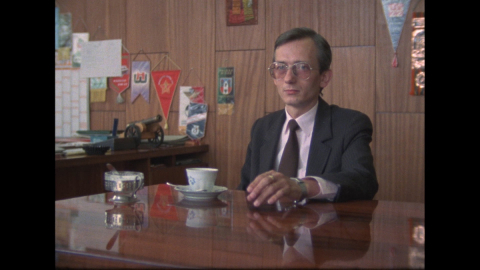