In Poland the state finances film production? Why then it is possible that films are so critical to the society?

Films are not criticising the society but rather they are criticising the situation in Poland and criticising people who are responsible for that situation, so the films criticise the authorities. You know, there are not too many critical films in Poland.  In fact in Poland there are very few films concentrated on criticism. Once in a few years there are just one or two films that seriously criticises situation in Poland. The authorities cannot try not to produce such films at all because then Polish culture and Polish film would totally lose credibility abroad. In a situation of so sharp political, social and economic conflict the authorities cannot stop the expression of such crisis in art.

But you say that there are not many films like that? My next question was supposed to be: why the state does not subsidise more banal films, more commercial films?

And do you think that the state would like to produce such films most?

I suppose that the state would love to do that but they cannot afford it.

I would change the subject: how do you cope with the censorship?  Do the censors read the scenario and can you present the example of censorship actions in this field?

Censorship in Poland is a very broad idea and it is not limited to the Censorship Office. I have always to explain it abroad since people there tend to identify censorship with one office and one office worker. It does not function that way. But censorship is a wider idea. It starts from internalised censorship inside myself. I know what I am allowed to tell and what I can’t tell. Censorship is active on every step of film production. It starts with a scenario and ends at the finished film stage. It is not limited to the contact with one censorship office or one man from that office. First of all it is based on the contacts with the Ministry and various agencies of the Ministry. Of course finally it ends in the censorship office. Censorship as an office does not read scenarios. The scenarios are read by the Ministry of Culture and it is enough or the Ministry knows what we can tell in a film and what cannot appear in the film. Very often we try to fight together with the Ministry against the Censorship office to make them resign from some cuts suggested by the censors. It is often the case. But of course the Ministry has a censorship of its own, it is a censorship itself and it is very precise in censoring scripts and finished films. My relationship with the censorship is constant, it is eternal, on every stage of filmmaking and it is the same for all of us.  I think that the most dangerous is our internal censorship that we all have internalised.

Can you give your own example of your conflict with the censorship?

I have always had conflicts with the censorship. I can give you several or tens of examples.  Both my films and films of my colleagues are censored and the censors are cutting out scenes of various kinds. I have a film that recently has reached the cinemas, it is called “Blind Chance”, it has been waiting six years for the screening. I have other films that have waited for five, four or three years depending on the situation. I have lots of examples like that. The censorship is picking on a film, they demand various cuts, quite often in the scenes where I would never expect that.

What example would you like? It is really such a common situation, so many times that I do not know what to say… Recently they cut out a scene from Blind Chance. The problem was a few words form the song “Internationale” sang in a non-serious situation. Namely, a naked broad and a naked guy after a love scene and he was singing for her a few notes of “Internationale” – I had to cut it out. They also cut out from the film a scene that I cared for, where a young poet and bard sang a song on a clandestine concert. They cut it out because that bard is now working at Radio Free Europe so he cannot be shown in Poland. I do not understand why. As if he did not exist, although he used to be very popular singer in Poland.

Are there instances that you are surprised by the fact that the censorship actually releases something?

In the case of „Blind Chance”, it is my last released film, so it is easiest for me to discuss it, there is a question of Polish attitude towards Jews and a problem of 1968 in Poland – it has been all allowed for screening.

Do you think that feature and documentary films made in Poland are presenting real image of life in Poland?

No, they don’t, because they cannot present it.

My question will be cut out so please answer in full.

I think that you realise that film we made both features and documentaries cannot present cannot tell whole truth about the situation in Poland, because they cannot tell the truth. They can tell a little truth, a certain part of truth. They cannot tell the whole truth because it is not possible, you cannot demand that from a film.  It is a broader question. In fact, in our situation I think that the films cannot tell the truth because of the censorship and auto-censorship mechanisms we have described, including taboo subjects that are not touched in public in Poland at all.

How is the situation now different from the 1950ties?

In comparison to the West, what is the role of the Filmmakers Association in Poland?

Polish Filmmakers Association plays a role of certain protection of its members – more important protection in Poland than the union protection in the West.  It is not just the protection of interests, money or profession. It is a protection of the rights of authors, the rights to make a film they want to make, the rights to screen such a film. Of course the Polish Filmmakers’ Association cannot achieve much. Yet it is trying – sometimes with success – to broaden the space of freedom, but of course both our association and we all, as the filmmakers and the association’s members, believe that space of freedom is too small. Such is in fact the role of the filmmakers’ union in Poland.

So the Association is not a part of state control over the filmmakers but just the opposite?

How come that the Association has survived the martial law period?

In the period after the martial law majority of artistic and creative associations and unions were dissolved in result of sharp conflicts between the associations and the authorities. There were also similar plans to dissolve the Filmmakers Association. The Association remained because it decided to a kind of compromise.  The essence of compromise was the resignation of the then president of our Association, Andrzej Wajda. We had to choose another president who is a decent man and our friend. I believe that in fact the Association has not changed. Although the Association can achieve much less now than in the beginning of the eighties. At the moment – no. I think that it was good idea and I have supported the compromise to keep our union in spite of all the turmoil that we have faced. In a sense we have a union that we can appeal to, we can consult the union, we can talk to someone. So if the better times come (I doubt it) we will still have our organisation – it will still exist. That structure will remain, will survive.

The problem with other creative unions was that they refused to compromise?

They were pressed to compromise they projects to the greater extent and I understand that they could not accept that.

I heard you said something similar that we don't like the current situation, but we will live with it.

Yes, that is true that I have said that.

There were people who were very critical about it.

There were people who were very critical and believed that they cannot live with that in mind. But I think that they were wrong because everybody is still alive.

What is the subject of the film you are making now?

It is one of ten films, most of them are meant to be shown on TV, some of them for the cinema shows. The title of all of them is Decalogue, Decalogue 1, 2, 3, 4, 5 up to 10. The one being made here in the court room is Decalogue 5. It is a film for cinema shows, it will be shown on TV too. The film tells the story of the murderer who killed a taxi driver and the story of the murderer’s hanging. I suppose it is one of the first very precise images of the execution of death penalty in our country.

Why do you make movies, what is your motivation?

I do not know. Maybe it is related to the subject we have already mentioned: to show a little bit of truth. My real motivation stems perhaps from the fact that I would like to tell a story to my audience, the story that seems important to me at this moment of life in our country. In our situation it seems important to me to say this and not something else right now. I do not know myself why I am making films. 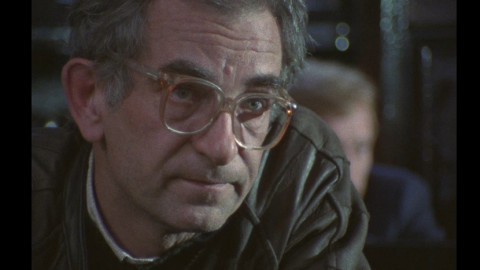