You are in charge of propaganda and cultural affairs at the central committee. It must be a difficult task in a country which is overwhelmingly Catholic.

We should have the knowledge that Poland has always pluralistic society is considered ideological problems and if somebody is not respecting it, he's making two errors. We after the 1981... We are building the concept of our information, our propaganda based on the knowledge about thepluralistic society. Of course, there is not... Of course there is... You mentioned the church influence, but not only church. We have the influence of the full information going on from abroad. We have the pluralistic press. It seems to me that the pluralistic press in Poland is much more different as a pluralistic way that in the West, if we take under consideration the communist press and the Catholic press, if you will take under consideration differences... Thus, there are even much broader...

Is much broader than in some Western countries. So what is the issue of it? First. To give full information whatever is possible to give to the people, especially the information showing the different aspects on the problem. So for example, you could notice that our TV, our radio is giving a lot of information that a lot of people are not agreed with, is complaining, is discussing and so on. Second problem, what is the most important that we are coming to the conclusion we know about is the form of new information. This is a very important aspect of the satisfying of the people by this information. If you're just sitting in the TV and saying to somebody, it is the form that some people are not respecting it, they are not. They are not approving. Some people, they want to have not only a different view, but also in form much more admissible to the concerns of the people. So, for example, a young generation, they want to have very quick information, information that is going just immediately after the events. So I would like to tell you that there is the policy of our department in central committee. So it means to give to the people as much as possible variety of information. It means full information. Second, to pay attention to the form of information and the third to pay attention to the speed of information. Who is giving the first information is right. I would like to tell you there is the rule that there is in the West as a principle respected. Also the same we want to obtain...

Who decides what kind of information can be published or not?

It seems to me that it is completely untrue what you say. The party is retreating from the from the sphere of influence on the ideology, especially on the economy. But problem is there is quite different means of influencing of it. Party don't want to interfere in detail aspects. Party has lines of political and ideological activity. And this line is followed by the people who are responsible for different areas, for different spheres of activity, ideological of economical. And I would like to tell you that problem, not belong if some gentlemen belong to party or not. If he's able to lead the group that easily, if he is able to manage of the industry or other organisation of economy, that the problem of the policy party. So it means not direct influence, not direct how to say, manoeuvring by hands, but to lead by the people able people, there are... They have the possibility to fulfill the policy, the guidelines of the party in their concrete activity.

So they their role is to implement the policy...

The party gives the policy, their role is to... the political participation is in the implementation of the party voice.

What is your impression about the reforms there and what is, of course, their relevance to what is going on here?

If you allow me first, I will start from differences. It seems to me that what's going on in Soviet Union there is the fact of very deep analysts of the leadership of Soviet Union made in the last few years. You could feel when you are in Soviet Union and you are talking with different people, how deep analyzed they made of all skill of political, economical, social life in Soviet Union. I would like to tell you that they are very critical, but I must say they always are constructive also to the past. So it means nobody in Soviet Union is saying - what it was before, everything was wrong. And what it is now and will be in the future, there will be the bright resolvement. They have this, how to say, very logical approach to the processes, the process has the beginning. They have not beginning and they have not end. And they are cooling like the river. It seems to me that there is the effect of the intellectual work, intellectual activity that in Soviet Union long time ago they started.

So it's inspiration for you.

Your reforms come from below, whereas Gorbachev's reform comes from above.

Exactly. So that the reason that if you now saying that we are on the same wave of changes now we are closing to each other due to the policy of party in Poland, we are leading of intellectual process what to do in the future. So it means to lead the changes in our country in the future. So I would like to say you that my impression now that now we are in the situation when we are closer to each other as concerns the future resolving of the problems in the sphere of economy, in the sphere of rebuilding the party, of reconstructing the party, of the changes in the sphere of ideology and so, and so...

How do you assess the strengths of the opposition in Poland and is it a serious challenge for the party today?

First, your question, it seems to be, is not correct. You use the word strength. I would like to say nothing offensive today to these people. That's my call to say approach. But when I'm looking at their of their activity, it seems to me that they're all... what they are doing, they behavior like generals, They have the [inaudible]... they have no army. That the problem of the situation in Poland, they could give the orders, you know, they could write the appeal and so on. These people have no soldiers to be successive and that's the situation in our country. They lost the workers. Now in Poland there is reverse what said Gramsci. Workers start to believe what party is doing. I would like to give you some, some my experience. Workers on the meeting of the party, they are very critical. They are very, how to say, sometimes even aggressive about the activity of the party. And I would like to tell you - a few weeks ago, I had such a meeting with the workers of the Silesia and they were very critical about different things in Poland, especially in the sphere of economy. And so. And I would like to tell you, they were so critical Then some moment of this discussion, I became a little bit sad. Probably I lost, you know, the temper side was silent and probably it was visible in the in the audience, one of the workers said: Mr. Bisztyga, don't worry. We are criticize you... We are criticize you as we are criticizing our wives, because they are our wives and you we the right to criticize. The same.. our approach is to our party. So I would like to tell you now we have the situation that is completely reversed. What it was a few years ago. Workers criticize the party from the side. Now they're criticizing many problems, including the party, taking under consideration that they are in... What they are saying is respected by the policy of the party.

But we've also seen many workers in the churches, we've been in Nowa Huta and we've seen the workers at mass...

So one can be a good communist and a good catholic.

Exactly. Could be, especially if he's a worker.

So does it mean you have a historical compromise between the party and the church?

There is not the question of the historical compromise because we are respecting what the reality in Poland is. Probably the children. We had a quite different view what the father they have, probably grandchildren. They have quite different, you know, [inaudible] that their grandfather have. So we are looking for the evolution for the process that should go in Poland and is going on in Poland. So what is the most important the policy of the party that we are Marxist and as you know, probably in the United Kingdom, you have much better admission to the original what Marx said. He said that in Marxism there is a method, nothing more. In Marxism there is a method of critical analysis of the real facts. So we are analyzing of the real facts and towards the real facts we are directing our policy. So I'm not... I'm sorry to say, I don't see the controversy. What you ask me if there is the member of the party and he is going to the church and that he is building socialism, there is no controversy in it.

But that was the initial hope in the 1950s when Nowa Huta was built, they thought there was a new worker will be... will come into being. He will drop the Catholic Church. And 30 years after they had Solidarity, which started towards the strike and a mass.

Maybe that there were such a people that they thought that it is possible to just to screw one head and to screw the second one and everything will be OK. But I would like to tell you that never we thought in the category, that building the socialism, there is just the acts. So it means to build a Nowa Huta and immediately people will be changed there. We never thought in the category... Maybe that there were people that thought in this category, they were primitive. History shows that they are primitive. Maybe there is the cost of our learning. Maybe. Because, as you could notice in Poland, what is the most characteristic now that you are not thinking in the category of facts changed immediately, just acts that are... tomorrow are giving the facts. We are thinking in the category of processes sometimes very painful, sometimes requiring time, and that the problem that you could notice in our party now is as the rule of activity of communism in Poland. 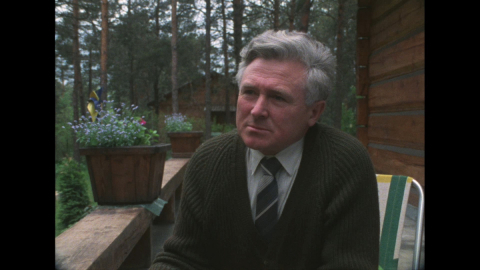