I understand that the role of the Club of Catholic Intellectuals is not merely confined to intellectuals.

Well, I think it’s much broader, really, because, well, it isn’t a club in the English sense. It’s more or less an association of lay Catholics. And then there is a question of translating the word “intelligentsia,” the Polish word “inteligencja,” which really means white-collar and not the English word “intelligentsia” or “intellectual.” Well, we have about a thousand members here in Kraków and there are not a thousand intellectuals in Kraków. Though we, of course, have members who are intellectuals in the club.

And could you give us some examples the way the activities here have been related to the general problems of society?

Well, I think that the main purpose of the Club is formation: to form people to be responsible, to be responsible partners in society, members of society, citizens of a country. Responsible, honest, well, of course good Catholics, too. I think that, generally speaking, we have assumed as our aim what Cardinal Wojtyła, when he was still archbishop in Kraków, said that man is the subject and not the object of his activities and of history. So society is not the object but the subject. This is very important in a totalitarian state because all totalitarian systems want to reduce society into objects that can be manipulated. And this subjectivity has been — to impart this subjectivity has been one of our purposes. And this is also what Pope John Paul II said here in Kraków during his first pilgrimage in his famous sermon during the mass here.

How was this illustrated during the Solidarity period here?

Well, you see, the illustration of this in Solidarity. This was the teaching of the Pope and this was broadly, widely accepted here in Poland. Well, of course everybody here knows that Solidarity would have been probably impossible without the Polish Pope’s first pilgrimage. And then, at a meeting in Nowa Huta in the steelworks, in this Lenin Steelworks, where there were, I don’t know, some hundreds of workers, and not only workers, somebody started speaking about subjectivity and objectivity. A worker started speaking about subjectivity and objectivity. And, as you know, these are rather philosophical concepts, not very easy to understand. He very well knew what he was talking about and the people who were listening to him knew very well what he was talking about. This illustrates how mentality had changed and indeed had to change before Solidarity, through Solidarity and before Solidarity was set up.

But concretely, I think that your Club has an association with Solidarity.

Oh yes, oh yes, very much so, very much so. At the first meeting held here in Kraków to set up… preparing the setting up of Independent Free Trade Union, I was present there and, the next day, we had an information centre set up in this room. At the same time, in the steelworks, the independent union was being set up, organised by the workers. And here we already had an information centre, hundreds of people coming in for a week to ask how to organise an independent free trade union. This was even before the name Solidarity was adopted, so this… And it was, you know, the atmosphere here was somewhat like revolutionary: people coming in, workers coming in from all the southern part of Poland, not Silesia but more to the east, smoking cigarettes, stinking cigarettes, you know, and sort of everybody going about and people are talking. You know, that was really quite extraordinary place. Sometimes, you see those scenes in films on revolutions or things like that. That was something like that here, with…

So the old dream of bringing intellectuals and workers together was happening right here?

Oh yes, yes, very much so. Well, it started much earlier. It started six years earlier with KOR (K-O-R) but very much so it was. And the Clubs’ union with Solidarity, here in Kraków and everywhere in Poland, was very strict. Well, the Warsaw Club, which is independent of ours (each of the clubs is independent of ours), sent out over 10 experts during the strikes in Gdańsk in 1980; five of them were members of the Warsaw Club. And Solidarity sort of reciprocated because in many places new clubs were being set up in 1980–81, very often at the demand of Solidarity.

Now you’ve described the system as totalitarian but, in the city of Kraków, one cannot escape the feeling that the Church in particular is very powerful, that there are a number of organisations, independent organisation such as your Club of Catholic Intellectuals that can exist. How can you reconcile the two?

Well, you see, we know this from experience. We know this system from experience and the system, you have to remember, is evolving. We can’t separate it from the first years after the war under Stalin, the Stalinist system, which was a brutal dictatorship. And then it has been gradually evolving: 1956 was the first step and then 1970, 1976, 1980 and so on were the next steps gradually evolving the situation, changing the situation. This is one aspect of it. Another aspect, I think, is something to do with the Polish character because the Stalinist system was never as brutal and as bloody as it was in the other East European countries. Here… well, Gomułka was never executed, you know, he was kept in prison while you had leaders in Czechoslovakia, in Hungary and elsewhere, who were simply shot, you know. I think there is something in the Polish, well, history tradition, maybe character, which sort of makes bloody settling of accounts difficult.

Well, the state of the system. It’s very difficult to answer that question. I think that we are now witnessing the end of an empire. The empire, which has been aggressive and expanding for many years, has now reached its, probably, limits. I am not speaking of time. I don’t know whether it will be. I can’t say anything about years, how many years it will take but I think you can see it very well in Poland that the communist system has failed completely. It hasn’t answered any of the needs of the people. On the contrary, it has, well, forced them into greater poverty than before. It has been cramping their initiative, it has been cramping development. You can see it today. In the first years after the war, you couldn’t see it so well because, well, an undeveloped country, a country destroyed by the war needs a central planning economy to advance more quickly. But, once this economy reaches a certain state of development, then central planning is, well, stopping the further progress. And I think this applies to all the countries in Europe. For instance, in Hungary, they’re trying to do something; they’re trying to do something but even there they have run into very serious economic difficulties and probably very soon they will have a crisis. But everywhere else, you can see elements of economic crisis just as much as you can see them in Poland. Perhaps not to that extent but you can see them. And of course Gorbachev’s policy in the Soviet Union is also an attempt to prevent this coming crisis.

How far can pressure from society, from the independent groups that exist here, push back the state intervention?

Well, again the question is difficult to answer. The question how far we can push back the pressure of a state because if there is no pressure, the state will never—the system will never retreat. So if there’s too much pressure then we have martial law, as we had in December 1981. But I think that the constant pressure of society is absolutely necessary and only with constant pressure can things be changed. I think that in Poland a very important part was played by the Church. Poland is a very uniform Catholic country, 90%–95% really are baptised in the Catholic Church. And here the opposition to the system was because of the Church. The Church, on one hand, gave the place where this — gave enough room for this pressure to manifest itself and to express itself; and, on the other hand, the Church supplied or was the carrier of true values. And I really think that the Polish opposition isn’t so much a material or mass or something like that. It’s really in moral terms so values are here the crucial issue. For instance, always the demands of the workers already in 1956 were for truth. They were asking for truth in the information, in the media, in social life.

Ever since the end of the war, the Polish intellectuals have tried to become independent from the state. How independent of the Church are they today?

How would you relate the changes that have occurred in Poland to what is happening in the Soviet bloc in general, in your neighbouring countries: in Czechoslovakia, in Hungary, in East Germany? How much awareness is there of the interaction between what is happening?

Well, I think that this is — the awareness of interaction is quite a new aspect to the situation. Probably that declaration of — how many, 120 — intellectuals from Hungary, Czechoslovakia, Poland and the DDR was the most important event that took place within the last few years within the block because this is for the first time that the different countries sort of start to, well, think of cooperating within the system. And, presumably, the Soviet Union won’t be able to resist a trend for change, a drive for change, for reform if it takes place simultaneously in more than one of the East Bloc countries. For instance, if Solidarity occurred in two or three countries at the same time — well, I am a utopian at this point, you know, hopeful thinking — but if it had occurred in several countries, in more than one country, probably it would have been almost impossible to crush.

But do you think that if Solidarity happened now, with changes happening in the Soviet Union, that it would make any difference in the Soviet attitude?

No, I don’t think it would make any difference in the Soviet attitude. It is an empire and it is an empire which has to protect its interests.

Well, probably the Soviet Union would have to be in the position, in a situation in which they would have to accept changes within their sphere of interests — probably. I don’t know, maybe economic problems, maybe other problems within the Soviet Union. I suppose the pressures from the different nationalities within the Soviet Union are quite strong and mounting and then if there were coordinated pressures from — I am not thinking really of coordination—simultaneous, let’s say, pressures from different East European countries — East Bloc countries (Central European, not East European; Central European countries make the difference) — then again the situation would be difficult and would probably force some changes.

Would these changes entail neutralisation of Central Europe, for instance? Is that one of the options that you think would be favourable to…

Well, I’m not thinking of options, I’m thinking in terms of hope and necessity. World peace is both a hope and a necessity for the world. I think the general tendency in the world is towards peace and not war. War has become really impossible. And if these hopes and these necessities are to be realised then neutralisation — you call it neutralisation, I don’t know how to call it — would be necessary. 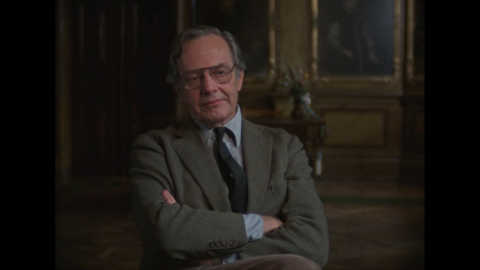