People came to Nowa Huta from villages, where they did not have jobs, there were big families, they looked for a job, they found both job and money. At first, they even found satisfaction in this job. They were offered all sorts of entertainment, enormous brainwashing, mass meetings, but these people started to settle down, raise families. When you start a family, you think about children. When you think about children, you need to raise them, and then they did not follow the offer of communism to raise a socialist man. Well, they followed what they were brought up with, they recreated their family model. They taught kids to believe in God, they taught them commandments, and so they started to look for a church. There was a single church, a dilapidated Cistercian Abbey, which then revived. Huta attended services there. Both Party members and non-members sent their children there to Religious Education. All the people, as you need to give these kids moral fibre. They were not into the enigmatic lure of socialist morality. They knew that you need to support the foundation of your children’s upbringing on something solid, so they started to adopt sacraments, live a religious life. And since they came from the countryside, it came easy. Then people started comparing how it was here and elsewhere in the world. They learned to read, graduated from schools. And as village people are practical, they started to think practically. They knew how to read and think, and started comparing and rebel against the multitude of words in socialism and their inconsistency with the practice of socialism. And so first signs of mistrust emerged, which later evolved into a rebellion. In 1960, when the authorities consented to building of a church and then withdrew the consent. The fight for the cross, imprisoning people… It bonded people together. Then came Solidarity, when everybody… Cause no other unions, industry unions actually existed. Everybody espoused those ideals, because in them they found Christian ideals. And it is them who invited priests to the combine for them to say mass, hear confession. Then the blessing of banners. In it they saw the embodiment of their ideals. Yes, so this road started to branch first in people’s awareness. They could read but also started to think. Then, in comparing the practice with ideas, and then they themselves started reaching for the roots of their identity and started to desire their own identity. And that is why the Pope, as I believe, came to Nowa Huta twice. Once in Mogiła – the old Nowa Huta where the work on work took place around the cross, the first parish, community, and then he came to our church in Mistrzejowice, which was built out of those people. It is them who fought for it and built it. And here he put the gospel of work into the hands of the people of Nowa Huta. And owing to this it continues here.

After the Solidarity period, what is the attitude of ordinary people towards the Party?

Perhaps rather after the outburst of martial law when this great shock came with the Party resorting to the army again and started shooting at workers. Many people discarded their party cards. What was left was the entire nomenclature system, the army, the police, the functionaries, the party activists. There are almost no workers in the Party till now. There is this functionaries bureaucratic establishment. And they keep on doing their thing. They talk a lot, promise, but the workers are wary, don’t join. There was an article in Polityka once, which said that you don’t join the Party for ideological, internal reasons but you join the Party to get a flat, position or ration more readily. And the Party is now a group of people holding power which has already understood, so it seems to me, the need for reforms and which constantly seeks the nation’s trust, that of the workers in particular, but is still afraid of them. And so I see that the workers are still distrustful, cause if you put your hand on hot sheet metal once and get burned, do that again and get burned again, then for the third time, why would you do that for the fourth time? To get burned? After all the reform will be done by the same people who have brought the country to ruin and misery. And this is the Party. Because they took the reins and the same people have stayed, of the same mentality. That is why I don’t see any prospect for it.

And what is the Church, beyond the provision of social… of spiritual solace, accomplishing now? How does the Church function as a counterculture?

In order for this question to resonate in the answer, one needs some, a few words on history. For a few post-war years until ’56, the Church, so the congregation, bishops and priests, we fought for our own identity so that I was not like in Czechoslovakia, where the Church acts as licensed by the party. For the Church to be a free independent force, have its own structure, own law and for the Party to have to reckon with it. Thanks to Primate Wyszyński, the attitude of the clergy and congregation this issue was resolved successfully. Later on, roughly until the 70s, the battle was about children. The Party decided to disconnect children. Religion education was eradicated from schools and we were busy organising catechisation out of school as until then for hundreds of years it was taught there. Eradicated from school, we had to provide the entire base: religion classrooms, catechisation curriculum. Later on, when Gierek came, he decided to disconnect the youth.

When it failed, the Church took care of the youth: parish retreats were started by Reverend Blachnicki, university chaplaincy centres, with Cardinal Wojtyła as its driving force, then pilgrimages. The youth’s problems resonated with the Church. The Party offered jobs, money, comfort, quick promotions, but human aspirations are deeper. And in ’80, adults entered the Church demanding that the Church gives them something too. Adult workers used to be as if out of the way. They were only to attend masses, give money for the collection, help with the construction. And now, when the workers came with their problems, the Church had to give them an answer, we the priests had to give an answer. Of course, we could not take care of the adults using the method you use working with children, the method you use with the young. An adult man is a vast, rich world, the world of awareness, culture, religious life, social, economic, political life. And the issue aroused of the social doctrine of the Church. It was already back in the martial law period that I met with Reverend Popiełuszko, with Reverend Jankowski, with many colleagues. What to give those people to shape them into responsible citizens of this state, who are not merely exposed to the influence and manipulation of television, press, propaganda but also have their own awareness of their personality, their own dignity, which they expressed in Solidarity and which was terminated. The Church became the ground, the space where they could fulfil themselves. It is only now, as I said, that I can specify what I am even doing here. So, firstly, it’s normal ministry work, Holy Masses, confession, catechisation. Twenty one hours of religion instruction with children and the youth. And now, for the working people, workers, engineers the Holy Mass is central but after the Holy Mass the few thousand people need to take something to their consciousness. So I invite professors of economy, editors, journalists. I invite artists, visual artists to organising exhibitions, lectures that raise awareness. And for some we organise Christian working-class universities where for two years comprehensive lectures are delivered on economy, politics, social psychology, history of Poland, social doctrine of the Church, professional ethics, as all this has lain fallow. It was for children but adults need to find their world. I invite musicians, I invite philharmonic to broaden the world of impressions, ideas and the world of awareness, because this is our entire Christian world. And owing to it, this parish is here, this centre of workmen ministry is living its own life. 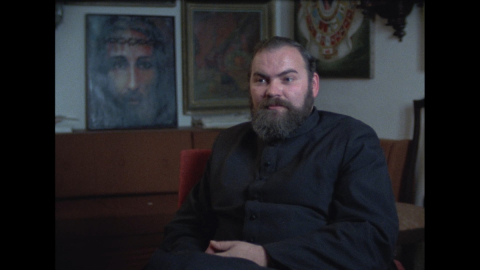 Kazimierz Jancarz (born December 9, 1947, died March 25, 1993) - Polish Catholic priest, an opposition activist in Polish People's Republic. After martial law was declared in Poland, Father Jancarz became the workers' chaplain. He organized help for the repressed and injured. In 1983 he founded the Christian Workers' University, where Kraków academics gave lectures on religion, ethics, sociology, history and economics for the workers. After the pacification of the Lenin Steelworks (May 1988), he established the Vicariate of Solidarity with the Needy, which provided material aid to the injured and unemployed, organized transports of food and clothing for the poorest, and kept records of those who had suffered during the strike.