If you allow the parties to become more democratic that would inevitably mean factions appearing in the party and if you also revivify parliament and allow mass organizations outside party control to represent interest groups, isn’t this in effect allowing political parties to emerge? And isn’t this going to destroy the unity and leading role of the Communist Party?

I cannot see that far into the future, but I know that currently these processes are verifiable and controllable from the point of maintaining the one-party system while the political life becomes very colourful, because organizations will appear especially by the initiative of the population that represent the interest of certain groups, these having been quite unusual so far. Now, whatever will happen on the longer term, how these processes will evolve throughout the years, or even decades, that is a matter for our children and our children’s children to deal with.

All social movements, organizations and endeavours that fulfil some fundamental requirements – such as observing the provisions of our constitution, or taking part in building socialism despite of having different ideas on socialism, approving our international obligations, and also accepting and respecting the leading role of the party –, in this case we not only want to rely on and have a dialog with them, we also would like to cooperate. Fidesz is a different subject, so I would handle it separately, because as a party, we expressed our wish, that we don’t want to have another national youth organization apart from the Hungarian Young Communist League, because that would divide our country’s youth. However, any other type of activity among young people is acceptable. Whatever the fate of Fidesz will be, that does not depend on the party, but on governmental and legal institutions.

The HSWP on conference proposed setting up constitutional courts to safeguard human rights, Writer’s Association and so on. But Mr Grósz said on Saturday that administrative measures might be resorted to against the party’s opponents still. Now, this means that these individuals the party thinks are dangerous and who have been harassed for their political activities, like Jenő Nagy, the publisher Gábor Demszky, will they not be protected by such courts?

Now, we must look a bit into the future, because at present there is no law to circumscribe and assure the right of exercising freedom of assembly and of association. These laws already exist in Western European countries and we are taking them into consideration in the new law-making process. I hope that by the end of this year our Parliament will accept such law, after a certain social debate however. In that case, all activities will be considered legal which fulfil these three or four requirements mentioned above. If these laws are violated, let’s say by the authorities, in that case the court of law will provide justice to the people mentioned before. 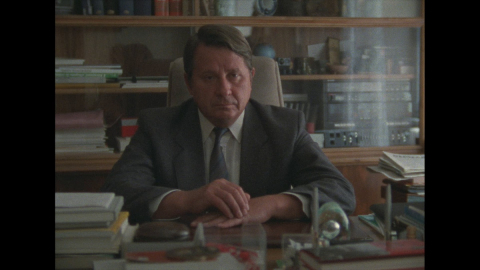 János Berecz, Hungarian politician, was born on 18 September 1930 in Ibrány, a small town in Szabolcs County. He married twice and had three children from his first marriage. His parents were poor peasants farming on one or two acres. He completed his elementary schools in his hometown, then he attended the Grammar School of the Reformed College of Sárospatak, while his two brothers went to Nyíregyháza. He graduated from the Lajos Kossuth Grammar School of Sátoraljaújhely in 1950.

He began his university studies at the Lajos Kossuth University of Debrecen, majoring in Hungarian language and literature and history, and then continued his studies at the Department of Scientific Socialism of the Eötvös Loránd University, Faculty of Humanities. He became a student at the Lenin Institute, which was established within the university and then became independent in 1954, and was also the secretary of the Working Youth Association (WYA). He graduated in 1955, after which he became a political associate of the WYA Budapest Committee. In the spring of 1957 he worked as a political associate of the Hungarian Young Communist League, and from 1960 he became the head of the university and high school department of the Central Committee of the Hungarian Young Communist League. From September 1963 he attended the Academy of Social Sciences of the Soviet Communist Party, and in 1967 he obtained a doctoral degree. His dissertation entitled 1956 Counter-Revolution in Hungary: Words and Weapons was published in print in 1969, having two more editions until 1989. This work became the basic book relating the events of 1956 in the Kádár era, and it served as a reference book until 1989.

From August 1966 he was the secretary of the party committee of the Ministry of Foreign Affairs, in 1972 he became the deputy head of the Foreign Affairs Department of the Central Committee of the Hungarian Socialist People’s Party, and from 1974 he was the leader of it. He joined the Central Committee in 1980 and was appointed editor-in-chief of Népszabadság in 1982. From 1985, as the secretary of the ideological Central Committee, he supervised the Agitation and Propaganda Department, in addition, he received the leadership of the Agitation and Propaganda Committee, taking over the duties of György Aczél. During this period he became one of the most influential politicians of the party, he was considered a close confidant of János Kádár. In 1987, on the recommendation of János Kádár, he joined the party’s innermost decision-making body, the Political Committee. He insisted on the autocracy of the Hungarian Socialist Workers’ Party all along, but due to the changing circumstances, he was ousted from the Political Committee in the spring of 1989, and a few months later he was relieved of his post as secretary of the Central Committee.