In the future the economy may land on the hands of bankers, shareholders, entrepreneurs. That might lead to widespread bankruptcies and large scale unemployment. Now, how do you see this problem, this situation? (interpreter's voice in Hungarian)

I expect, in answer to your question, I expect that to be so. According to our calculations, in practice, during the coming 5-10 years about 6-700,000 people will have to change jobs. This goes hand-in-hand naturally with the liquidation and running down of firms, with the alteration of the industrial and production structure. It is also possible, quite probable, that 1 or 2 % of the work force will be temporarily looking for jobs or will be in the process of retraining. That's the natural way and order of things. But I don't think that you'd get here the same rate of unemployment as, say, in England. The people realize this and they will understand, even if right now it is very difficult to alert them and to make them understand, that all this is taking place in their own interest and that it is necessary. Once the needs of the world market and of the people change, you cannot go on making the same product. This is completely natural and, from this point of view, I feel that this is a healthy development. And it is necessary, because socialism, after all, has proclaimed that it will provide the highest level of welfare and the highest standard of living for the people. If production does not become efficient, it will be unable to reach this goal. I've already said and I'll repeat that in an economic competition, which is a competition between two social systems, one cannot lose a war, one can only win battles. It's possible that in the last few years we've lost a few battles through our own faults, but economic competition gives us a chance to win the forthcoming battles if we draw the conclusions from the mistakes we’ve made and establish efficient production. It is not in the methods of production where socialism has to differ from capitalism, as I’ve said, but in distribution. It is in the changed relations of distribution and in the distribution of profits and incomes, where it must differ significantly.

Well, the basic problem is the size of the national income actually produced. A socialist country cannot afford not to secure for its citizens, in some way and at some level a basic security, the basic needs for existence. Therefore this is one of the problems. The introduction of full market conditions could have inflationary effect and it could only be launched, if we take care, in good time, of the people it has effect on, be they retirees, or those at the beginning of their careers, or those on low incomes, well, for that, first of all one has to produce efficiently and, for that, one has to create the monetary basis. Of course the basic problem, despite all that, is in the outlook, it is in the fear of the unknown. We could have taken much bolder steps towards market conditions. I think that we actually will take them in the coming years, since the autonomy of enterprises and the authoritarian rule in price formation is not real, they contradict each other in a market connotation and in this, consequently in my opinion, the full market conditions will be more fully consummated, but for their consummation it is also necessary for monetary relations to be dominant. And for that the functioning of banks is necessary. Therefore I feel that when this reform goes one step forward, actually the bank reform, then the circumstances will become ripe to have the market conditions dominant in Hungary. I must add, of course, that neither in England nor elsewhere does anyone entertain the illusion that real market conditions exist. After all today the Japanese could send their gunboats to the American shores to demand free trade, like one of the most important factors of market conditions. And another thing, everyone knows, that a good few multinational firms decide prices world-wide, but the voters, the people are left with the illusion that they have a choice. Therefore, real free-market conditions that characterized the age of classical capitalism and the last century do not exist in today's world and, in my opinion, they won't come back either.

Do you think that the party can withdraw altogether from the economy? (interpreter's voice in Hungarian)

I do not imagine such a thing, nor would I like it. The task of the party is to rule, the task of a government is to govern. In my opinion the party must give more freedom for the government to govern. For that it must work out a system of requirements and within that if the government governs well and efficiently and if it finds good economic mechanisms then this is what's needed. But, and I'd like to put this question to you, in my opinion the Conservative Party in England has the same foothold in the government and the same foothold in the economy and it doesn't want to retreat from there either. On the contrary, it wants to get in very much. Therefore, this is the wishful thinking of a few people that has no bearing on reality, no bearing on political conditions. And there's been not one instance in the world, where the ruling party would have withdrawn from the economy itself or from society. Who withdraws from the economy, withdraws from society. Therefore I see no reality in this whatever, but the division of tasks, the establishment of a mechanism that makes it possible to choose the right one out the numerous alternatives. That is what's needed.

You are behind the success of Skala supermarkets. How did you get the ideas and what is the secret for Skala's success? (interpreter's voice in Hungarian)

Well, it would be a great mistake, if I said that it was my own personal achievement. There was an extremely good team there, lots of young people who wanted to do something different from what they'd been doing. Therefore, this is the first reason. The other, that in a social environment where the political leadership and the government also wanted something different, we put things into practice. And it proved to be an international success. After all we didn't do anything more, than apply commercial methods already in existence throughout the world. We dared to adopt them without reservations, denying - and I’m still denying it- the triple thesis of Stalinism, which, today is being denied by the socialist system itself and which has as one of its components the statement that in capitalism everything's bad. In capitalism commerce, the production of goods is much better organized in practice than here. So is the banking system. Therefore, we'll go on applying this boldly from now on.

You are a banker but most of your funds come from the state. So how independent from the state can you be? (interpreter's voice in Hungarian)

Of all the Hungarian banks ours in the only one where the state does not hold the majority of the voting shares. Our 341 shareholders come partly from the state-owned companies and from cooperatives and their votes exceed those of the state in the bank. It's only in our case where this stands. Consequently our task is to secure the maximum profits for the shareholders. The state is also our shareholder and as such it is also in its interest that we should bring as much profit as possible and that we should pay that profit into its coffers. The task is the same for me, in my capacity as a banker and it's the same for the bank's employees. As to what use the state puts this profit, it is up to parliament or to the leaders of the state. Our task is this: to put down as big profit as possible on the share-holders' table and of those shares, let me repeat, the state owns only a part.

Now, the companies you mention are state companies. So my question still holds. How independent of the state can you be? (interpreter's voice) 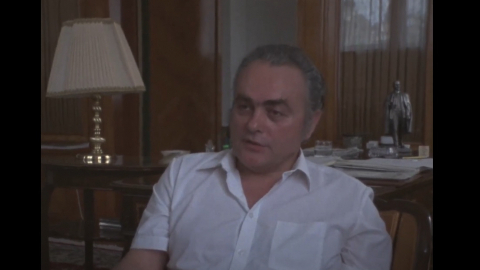 Sándor Demján, businessman and entrepreneur, was born on 14 May 1943, in Börvely, a town close to the Hungarian border, today part of Romania, and died in Budapest on 26 March 2018, at the age of 75. His father disappeared during the Second World War, his mother moved to Etyek in 1944 with her three children. After the war, due to extremely poor living conditions, his mother boarded out her son and his two sisters until she gained qualification for becoming a midwife. After obtaining a job at the maternity of Etyek, the children returned home and the family reunited.

He graduated from the Attila József High School in Budapest in 1961. He obtained a degree from the College of Trade and Tourism in 1965 as a scholarship holder of the National Association of Consumer Cooperatives. Due to his commitment, his journey led to Áfész (General Consumption and Sales Cooperative) of Gárdony, first as head of department and then as head of a commerce. At the age of 25, he was appointed president of Áfész of Szentmihály, later Gorsium Áfész, which was on the verge of bankruptcy. During this time, he had plenty of conflicts with the functionaries of the cooperative, but he usually emerged victorious from these, managing to work the Gorsium Áfész’s way up to the most successful cooperatives. In 1973, Szövosz (National Association of Cooperatives) invited him to run the Skála department store, and in 1979 he became the chief executive officer of Skála Coop, which owned and operated 15,000 áfész shops and 60 department stores. This particular Skála store grew into a vast corporate empire, its activities included retail and wholesale, and later foreign trade, but they also run industrial, service and agricultural companies.

At the rise of commercial banks in 1986, he was appointed to the position of chairman and chief executive officer of the Hungarian Credit Bank by the Ministry of Finance, although he had no experience in banking. Three years later, at the time of the regime change, he renounced the world of banking and accepted Andrew Sarlos’s offer to travel to Canada. From 1991, he was the chief executive officer of the Central European Investment Company. He returned home in 1995 and such real estate developments are associated with his name like the Bank Center office building, the Pólus Center and the Westend City Center.

He was the executive officer of one of the largest Hungarian employers' organizations, the VOSZ (National Association of Entrepreneurs and Employers), and until 2017 he was the president of the National Savings Cooperative Association, an advocacy organization for supporting cooperatives.

In 2008, with an estimated wealth of HUF 300 billion, he was the richest man in Hungary in 2008. He was co-founder of the Prima Primissima Prize in 2003, which aims at preserving the achievements of Hungarian intellectuals and enhancing the development of Hungarian science, arts and culture.

The Sándor Demján Foundation has founded scholarships for thousands of schoolchildren and students with difficult financial backgrounds.

For his work regarding the urban development of Budapest, he was rewarded with the title of honorary citizen of Budapest in 2003, and in 2013 he received the Grand Cross of the Hungarian Order of Merit.