What was the appeal of communism to people of your generation at the end of the war?

My generation was very young when it got into the communist movement, and before it to the anti-fascist movement, and in the years of war it got radicalised rapidly and became Stalinist. We thought… and it was very important for us, that we were the carriers of a world-redeeming thought, a world redeeming idea. That is… in a certain sense, in the spirit of this world-redeeming idea we thought that it was worth anything to create the power of the party, or as we thought at that time, of the working class.

So the only concept of socialism you had was Stalinist socialism?

This wasn’t socialism anymore; when we joined the anti-fascist movement then many of us still joined it as socialists, close to the Social-Democratic Party, close to Marxism, but through radicalisation we arrived at Stalinism, and already in ’44, in the underground, Stalin’s ‘Questions of Leninism’ became the most important text for us.

After the Communist Party in Hungary seized monopoly of political power there followed a period of terror, of show trials, and what I would like to ask is to what extent has this been simply the making of the Soviet Union, of Soviet pressure and to what extent was it an input of the Hungarian Communists?

By no means can you only explain this just with Soviet pressure. We would simplify it very much then. In Hungary at that time, amongst my generation the circle of party functionaries hungry for power became relatively widespread; they basically made an ideology of this power, that is the pursuit for power, and they felt that history took them upon its wings, when basically there wasn’t anything but rather great greed for power in the background of their ambition. But making an ideology of it. Dostoyevsky’s statement proved completely true, that is a man is basically an animal creating ideology…

Could you be more specific about the forms of Soviet interference in that crucial period?

When I was already Prime Minister then I didn’t, but when I was still minister of agriculture and even before that, when I was the minister of the state farms, I was surrounded with an army of Soviet advisers, but they in fact didn’t really put pressure on us, but they tried to help, to urge us in the realisation of Stalinist concepts which were awfully harmful for the Hungarian agriculture. This was the time when we started producing cotton and rubber dandelion in accordance with the Stalinist taught according to which in World War III these goods would be absolutely necessary. So, the advisers had their effects in this way. Soviet interference was even more direct when Stalin died, the Soviet leadership decided which person should have which position.

In 1953, shortly after Stalin’s death you went to Moscow. You were one of the first East-European leaders to go to Moscow, and attend a meeting which was meant to discuss the relationship between the Soviet Union and the East­European countries. What happened at that meeting?

A strange thing happened in Moscow. The members of the Politburo in Moscow unanimously – at that time you couldn’t feel yet the difference between the different groups, I mean Khrushchev’s and Malenkov’s group – unanimously criticised the Hungarian leadership, mainly the four members of the Hungarian leadership, i.e. Rákosi, Gerő, Révai and Mihály Farkas. And they demanded… demanded that we should introduce new economic policy; the Soviet criticism was rational and the Soviet reform suggestions were in fact positive. But after this the reforms unfortunately came to a break at the end of 1954 or at the beginning of ’55. But those suggestions in ’53 were very positive.

Now, there followed a period of brief liberalisation, clearly the Soviets have understood that something had to change in Eastern-Europe. But shortly after that they went back to the hard-line policy and brought back the old Stalinist guard and don’t you think that this is these sudden changes between loosening up and toughening up the political leadership in Hungary, which in a way destabilised the situation, and was one of the causes of the 56 revolution?

If in 1955 there hadn’t been a break in the Hungarian reform policy probably the armed uprising wouldn’t have taken place in 1956. We missed our last chance, I think, in July 1956; in July 1956 the Soviet leadership urged us to replace Rákosi. But we chose Gerő in place of Rákosi when at this time already we should have chosen Kádár, and instead of me, Imre Nagy should have been the Prime Minister. If in July, together with Rákosi’s dismissal, these two personnel changes had been made, that is Imre Nagy would have been Prime Minister and Rákosi (sic he probably means Kádár) the First Secretary, then there wouldn’t have been an armed uprising in October 1956. The opposition definitely demanded the personnel changes, but both in the personnel changes and in demanding reforms the opposition then in 1956 remained very level-headed, within socialist alternatives. Since both men whom I’ve spoken about, both Imre Nagy and Kádár were communists.

What was in your opinion the main factor which precipitated the 56 events?

In my opinion the moral-ethical bankruptcy of the old leadership, which resulted especially from the purges and show trials, and from the slowness of rehabilitation, and from its inability to introduce new reforms and personnel changes. I consider this to be the most important reason, and I consider the emergence of democratic opposition and party opposition as historical necessity, and I think that mainly not the forces of internal reactionaries took part in these movements, but masses, mainly the young who had been wounded in their national feelings. And similarly, I don’t think it’s right, either, to exaggerate the role of the West in the events. Here, the inner problems burst out into armed uprising.

How was the Kádár leadership able after 1956 to consolidate the situation?

At first Kádár was in a very difficult situation, because Kádár’s sociological basis as very restricted. In fact, this can be an explanation why the repression, in my opinion, was stronger than Kádár would have liked it. Because this restricted sociological basis, the humiliated political policemen, the humiliated party functionaries demanded revenge. 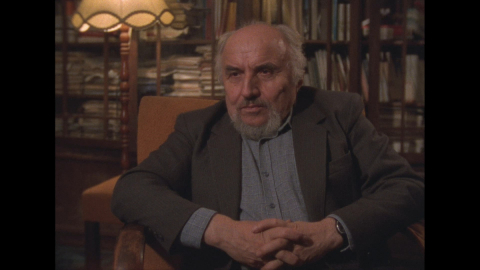 András Hegedüs, politician, sociologist, was born on 31 October 1922 in Szilsárkány, in a peasant family with a medium-size land, and died on 23 October 1999 in Budapest. He lost his father at an early age and his mother took care of him and his brother.

He completed his primary education in his home village and gained admission to the Lutheran Lyceum in Sopron. In 1941, after graduating from high school, he enrolled in the Faculty of Electrical Engineering at the József Nádor Technical University in Budapest. In 1943, he joined the Békepárt (Peace Party), and in August 1944, he was arrested and sentenced to two years in prison. In November, during the evacuation of the prison, he escaped from the train with several of his fellow inmates.

In January 1945, he became the provincial secretary of the newly founded Hungarian Democratic Youth Federation, and later served as its national organizing secretary. In early March 1946, he was sent to a six-month ideological training at the party academy. At the end of 1947, Ernő Gerő took him on as an agricultural specialist. In 1948, he became first deputy head then head of the Hungarian Communist Party’s Agricultural and Cooperative Department.

From 1950, he became a member of the Secretariat of the Hungarian Working People’s Party, and part of the inner circle of the party leadership. At the Second Congress of the Hungarian Working People’s Party he was elected a full member of the Political Committee and the Organizing Committee of the Central Executive Leadership. From 3 November 1951, he was Deputy Minister of Agriculture, and from 5 January 1952, he was appointed Minister of Agriculture and Forestry. In the first Imre Nagy government, he was the first deputy chairman of the Council of Ministers and head of the Ministry of Agriculture. On 18 April 1955, after the overthrow of Imre Nagy, he was appointed president of the Council of Ministers. On 24 October 1956, he was dismissed as Prime Minister, succeeded by Imre Nagy, but Hegedüs was credited with the proclamation of martial law and took political responsibility for the call of Soviet troops to Budapest, with a countersignature backdated to 28 October. He was expelled from the political committee on 28 October and was sent to the Soviet Union with his family.

In Moscow, he gradually distanced himself from the group of party leaders who had been dismissed with him. He became a senior research fellow at the Institute of Philosophy of the Soviet Academy of Sciences and developed interest in sociology. He returned home on 16 September 1958. He worked first as a research fellow at the Institute of Economics of the Hungarian Academy of Sciences and then as deputy chairman of the Central Statistical Office between 1961 and 1963. In 1963, he founded the Sociology Research Institute of the Hungarian Academy of Sciences and was appointed editor-in-chief of Valóság [Reality], a position from which he was dismissed in 1965. In 1966, he became a lecturer at the Károly Marx University of Economics. In 1968, he criticised the invasion of Czechoslovakia and then was dismissed from his post for his revisionist scientific views and was transferred to the Research Group on Industrial Economics of the Hungarian Academy of Sciences as a senior research fellow. In 1973, the Hungarian Socialist Workers’ Party convicted him of revisionism in the so-called "philosopher’s trial", and he was expelled from the party and dismissed from his post.

From the 1970s onwards, he consciously opposed the Kádár regime, and was a respected member of the democratic opposition movements that were being organised at that time, although he was not formally affiliated with neither of these groups. In the 1980s, Zoltán Zsille conducted a biographical interview with him entitled Élet egy eszme árnyékában [Life in the shadow of an idea], which was broadcast on Radio Free Europe in 1985 and published a year later by ABC Publishing in the form of a samizdat.