You began your working life as a cameraman and then as a documentary filmmaker during the Stalin period and lots of people think that must have been a very bad time to be a filmmaker, but perhaps wasn’t it in some ways exciting?

Well, of course it was exciting because, at that time many of us still thought that this social system meant something. But now, we know that it was full of illusions. The newsreels and documentaries made in that period were not real. Watching them now, one realizes that they were all lies. So, if you wanted to judge the period based on these films, you will not be able to do so. I made films about peasants, peasants in cooperatives, who, when standing in front of camera had to wear their Sunday best and that’s the way they had to look like. We adjusted the circumstances, to say the least. At that time, Hungarian agriculture was going through its greatest crisis. People were practically starving or close to starving, really. Life was very hard. But at that time too, we told the story of how we would have liked things to be. It was a form of human deception called optimism. Did we learn anything from this? Yes, I do think so. Looking back, I would say, it was very educational. Could you avoid this sort of thing in a society’s development? I hope one can. Though mankind’s history is not a guarantee for avoiding it at all. Because ever since man has been around there have always been these falsifications, murders etc. that stay permanently with us.

Was there any genuine belief amongst yourself and other filmmakers of the time that you were creating a genuinely new culture for a new man?

I’ve understood, mostly, yes. Of course, I believed that for a while, I believed it for a while since I had also lived in the world before 1945. At that time, I was relatively grown-up, I was 23, I studied law and ethnography at the university. Now, that was a society, which had almost feudal characteristics. Therefore, we believed in all kinds of changes and we thought we could do everything for a change, we thought everything was permissible for a change. Then it turned out that not everything is permissible, because a lack of freedom combined with permanent lies has its effect on society.

After the Stalin period was over, did you feel self-consciously as a filmmaker that one of your jobs was to push forward the frontiers of what could be discussed politically in the open, in public?

Well, I believe it’s true not only for this system, but probably is just the same everywhere else. But in Eastern Europe, culture and the arts are bound very closely together with politics. Well, it’s a tradition dating back hundreds of years. It’s only normal that man never accepts the existing circumstances, but always tries to push its limits. So, this is probably not just my duty, but everyone else’s.

Some people think in the West, that it’s a paradox that a state financed film industry is able to make good, great films. How do you explain this?

Well, this is a strange state. You must understand that this is a redistributive state. It doesn’t pay anybody a full salary, it doesn’t pay 100% for a work, but the state keeps back something so it can finance different public ventures. It’s not the state that supports us, it is my money, because I am not properly paid, it is mine and it is the workers’ money, and probably the representatives of the state may have some remorse, a guilty conscience. That’s why the state sometimes supports things they wouldn’t support officially otherwise.

Some of your films, like The Red and The White could be interpreted as a sort of almost a parody of the Stalinist collectivist ideals, because it seems to show a sort of destructivist-collectivist frenzy where no individual can survive, there’s no right or wrong. Is that, would that be a fair reading of a film like that?

Probably, everybody interprets whatever, a film, just as his, how shall I put it, his psyche leads him. Well yes, probably, probably this interpretation is also valid. Well, this ‘Csillagosok és katonák’ (the Hungarian title of The Red and the White) is basically a rather sad film because of this.

Do you feel you can maintain your integrity as a filmmaker, here in a country, in a system like this, compared to someone working in the West?

You can’t ask a filmmaker a question like this. In Western Europe, they try to maintain their integrity in other ways. Society has a different influence on my colleagues there. Here the influence stems not so much from financial but rather from political or other causes. My Western colleagues are first of all influenced by economic pressure. I don’t know whether a filmmaker should maintain his integrity, or not, I don’t really know. Probably he should do so. We, few Hungarians, we’re stuck with it, we’re genuinely trying to maintain our integrity. But it’s not taken for granted that it’s worthwhile in the film industry. 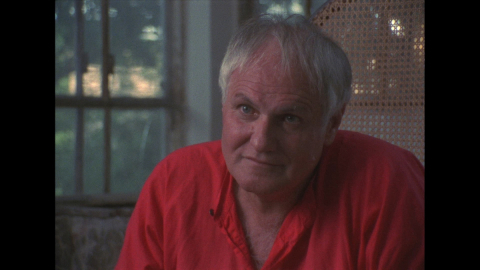 Miklós Jancsó, two-time Kossuth Prize and Béla Balázs Award winner film director, was born on 27 September 1921 in Vác and died on 31 January 2014 in Budapest, at the age of 92. He was married three times, and had two sons and a daughter. His family was from Transylvania, his father was a Szekler peasant, his mother was of Romanian descent, and according to family legend, Vlad the Impaler was among his ancestors. His father worked as the secretary of the Transylvanian government commissioner from 1916, and after the fall of the Austro-Hungarian Monarchy, the family settled in Hungary. He graduated from the Cistercian Order’s St. Stephen’s High School in Székesfehérvár, then applied to the Faculty of Law of the University in Pécs. After the Second Vienna Award, the family moved back to Transylvania for a short time, so he graduated from the Royal Hungarian Franz Joseph University of Kolozsvár (Cluj-Napoca).

At the end of the Second World War, he was taken prisoner of war by the Soviets, was dragged to the north, and worked in timber logging in Karelia, but after a few months he fell ill and was released home. He was treated at home with lung problems for one more month. Being attracted to theatre, folk dance, culture, he applied to the Academy of Drama and Film, where he graduated in 1951, but could not shot his final exam film due to lack of financial support. After college, he joined the news industry, making news reports, production reports, and documentaries until 1955. During the outbreak of the Hungarian Revolution of 1956, he was in China shooting a documentary about the Hungarian People's Army Performing Art Ensemble. After making a few short films, he shot his first feature film, A harangok Rómába mentek (The Bells Have Gone to Rome), in 1958, which did not receive any particular response.

In 1959, with the help of István Nemeskürty, he met the writer Gyula Hernádi, who became his permanent co-creator until his death in 2005. Their first joint film was Oldás és kötés (Cantata), after which cinema-goers could get tickets for a new Jancsó movie each year: Szegénylegények (The Round-Up), Csillagosok, katonák (The Red and the White), Fényes szelek (The Confrontation), etc. He also debuted as a theatre director in 1970 at the Theater 25 with his play Fényes szelek. His film Még kér a nép (Red Psalm) was made in 1972, winning the Best Director award at the Cannes Film Festival. The following year, his artistic work was also recognized at home: he received the Kossuth Prize.

Love and film invitations led him to Italy, he moved to Rome and lived there for nearly ten years. Then he returned home and a new creative era began in his art career, characterized by iconic works like Szörnyek évadja (Seasons of Monsters) and Jézus Krisztus horoszkópja (Jesus Christ's Horoscope). He received awards for his life work in 1979 and 1990, at Cannes and Venice respectively. He has been honorary professor at the University of Theatre and Film Arts in Budapest since 1988, and was an affiliate at Harvard between 1990 and 1992.

His art took a new direction in the late 1990s, when the Kapa and Pepe movies were made, which are quite far from Jancsó’s former serious tone. He received the Kossuth Prize again in 2006, the Prima Prize in 2010, and the Jubilee Prima Primissima Prize in 2012.

In 2009, he shot his last film, Oda az igazság (So Much for Justice!). His favourite actors and family members took part in the production. The film was photographed by his son, Nyika, the costumes were designed by his daughter, Katalin, and one of the main characters was played by one of his grandchildren, Jákob.