If someone came to one of these international work camps in Hungary now, I think they’d be a bit surprised how relaxed they are. Where is all the Marxist Leninist ideology and fervour going of the past?

You’re a member of the Hungarian Young Communist Organization, KISZ. Why?

I think that there’s no special reason other than I simply wanna do something. I wanna do something that is the kind of work that depends on my work, what I do, what I can change and there’s lots, lots of things to be done. It’s a, a good society cannot be accomplished by its own self L’art pour l’art it doesn’t come about that way that you have to do things for it and whether you call it KISZ or whether you call it anything else, it really doesn’t matter. We just have to be active in something. I am not..., that’s one of the reasons. The other reason, reason is that you have to take into consideration one’s personality. My personality is quite active, I’m not passive type, that second. And thirdly is because I believe in it. I really do believe in it and I think…

Sorry, do you believe in what exactly?

I believe that the socialist system, whether or not, it’s whether or not you can achieve things with it or not. It really doesn’t matter. The thing is developing, evolution is an important thing and I think socialism out of all the philosophies, I’m particularly calling this a philosophy, is more developed than any other philosophy, that mankind has developed yet or has examined yet. And I just simply believe in evolution or development. Even if it doesn’t matter what you call it.

Some critics say that this system is still run very much by a group of people at the top and young communist members cannot really changed it. May just take over this from the top. What do you say to that?

It’s a back-and-forth kind of thing. It’s not, first of all you have the Hungarian Communist Youth, sorry, first of all you have the Hungarian Socialist Workers' Party, then you have the Hungarian Communist Youth League. One is, they have a relationship of sort of a father-son relationship to each other. Obviously, I follow the ideas, the main ideas I would say, I have to empathize this, the main ideas of the Socialist Party. What I can do in my environment cannot be done by the Party, and the same thing around. So, I have my own job as the member of the Youth League and they have their own job. It’s not a question that we can coordinate well or not. The Party does take into consideration and does asks the opinion of the central committee, of the central local committee of the Hungarian Youth Council, Hungarian Youth League. So, it’s not all that far away from the Party, it just has its own areas that it has to work in.

Would you say the Party is democratic enough? Listens to people like you enough?

It depends on where, obviously the Party can’t go around to every little stepstone or every little, knock into every house and ask their opinion. That’s obvious. I think it’s democratic, in terms of that it has own opponent. And as long as it has its own opponent, they have enough information about their own country. As, as long as it keeps it that way.

So, you say it has its own opponent. What exactly do you mean?

Of course. Everybody has their own opinion. I mean it, it would be very, very strange if everybody had the same, same opinion as the other. It would be very unrealistic, and a naive thing to think about. But that’s just the point, to argue and open these questions.

Would you think you get people, young people here from camps like this from all over the world? What do you think that Hungarian communism in particular has to offer them?

Some people would say that lots of young people find the most difficult thing to accept about even a Hungarian system is the all-powerful position, the leading role of the Hungarian Socialist Workers' Party. How would you answer that criticism if it was made to you in a camp?

Could you repeat the question little bit specifically in…?

Some young people say that the problem, the thing they find most difficult to accept about even the Hungarian system is the all-powerful, leading role of the Hungarian Socialist Workers’ Party in society generally. How would you respond to that criticism?

I mean actually young people from outside Hungary.

They should live here a couple of years so to check that out. If a Hungarian would say that, for instance, let’s change the whole thing, and say that the Hungarians would say that. I would see what kind of person would say something like that. Whether he is an active person, whether he tried or not. Whether he really does feel that there is a top direction. Of course, there are directions. Which country doesn’t have a power? Does not have a power which is ahead of things? Of course.

Some young people find the most difficult thing to accept about the Hungarian system is the all-powerful, leading role of the Communist Party here, which dominates society in politics. How would you respond to that criticism?

Show me one group of young people anywhere else in the world that is satisfied. To be young means to be unsatisfied, that is obvious, who is satisfied there is something wrong with them. And that is our job, that’s what keeps us developing or keeps a certain country developing. To start out with the second part is that everywhere in the world there’s a controlling head or there’s a directing head. The question is how you do it? With what kind of philosophy, theory or practice do you do it with? Can it be changed or cannot, can it not be changed? Or with which power could it be changed if it needs to be changed? Not only changed but developed whether it needs to be developed or not. And in this case only young people can develop something, I mean obviously that is logical, that is to me it is. And if I hear a young person like that ask me a question that is totally natural, I think.

What would you say if they said the Party was too powerful here? Didn’t allow enough freedom of dissent, enough opposition.

I would, I would answer in such a way that the Austro-Hungarian Empire was even powerful, even more powerful. The Ethiopian Empire in those days was even more powerful. Hitler’s power was even more powerful and so on, and so forth. I can continue on. Great Britain’s power was powerful. It all depends on people, whether you keep up that power or you don’t. Our government does not stay in power unless its people want it to be that way or they don’t want if they don’t want it to be that way, obviously they will do something about it. So, I would say if that bothers you, do something about it.

And people in Hungary can, do you believe?

I believe it’s always a question of people. Whether you do something good or you do something bad is always depending on people. It’s a question of how you interpret it and I think it’s, if you feel active enough and you feel that your idea is have, has, has enough righteousness to it then you should be active about that question. In other words, you shouldn’t sit back and, and let things go by. Even socialism can be misunderstood, even capitalism can be misunderstood is an…, is an…, in it’s on away. 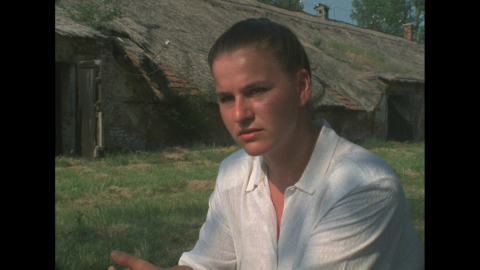